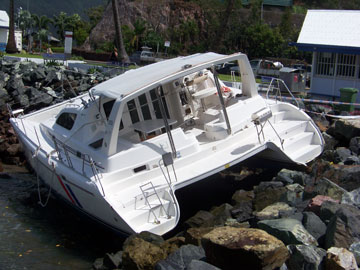 By WeatherWatch.co.nz readers Liz & Alf from the Queensland Armchair Guide

Living high above the entrance to one of Australia’s busiest harbours is a rewarding experience. Wonderful scenery and a tranquility that brightens up even the occasional overcast sky.

The wind had been lively at a steady 45km/h for most of the day as we waited for the arrival of Cyclone Ului. All preparations had been carried out during the day. Verandah cleared, windows taped and all the other necessary deeds done to prepare us for the event. At 9-pm the wind increased dramatically from the South and soon were well above 100km/h.

Loss of power instigated firing up the generator. The noise began to grow in intensity and winds began to gust appreciably more while Liz was becoming unnerved at the ferocity of the storm. We decided to retire to the ground floor, where the protection of concrete walls and ceilings dulled the noise somewhat.

An Iron Bark crashed down on the roof of the ensuite and metal roofparts started appearing in the back garden. We were aware of these events courtesy of a powerful searchlight and the bravado of sticking our necks out from time to time. The winds continued relentlessly for 3 1/2 hours until at 12-35am a final horrific gust of around 200km/h brought the first stanza to a close. Suddenly an eerie silence ushered in the Eye of the storm.

Out on the verandah in the darkness we could see several torchlights piercing the night sky. Further investigation revealed several neighbours wandering the street checking the fallen trees and whatever else one does on these occasions. After a period of complete silence which lasted 45 mins or so, the wind began to wail in the opposite direction.This time from the North. We farewelled the neighbours and retreated back inside to see out the second half performance.

The thunderous roar of the wind continued in earnest as we prepared for another nerve wrenching session of torment. I had gone upstairs several times during the storm to inspect in case of roof damage. Luck held until around 2-00am, as on this occasion I discovered the kitchen ceiling was letting in water through a light fitting.

Bucket strategically placed I returned downstairs away from the horrendous noises being amplified by the metal garage doors that managed to vibrate their locks open during the night.

During the storm we had heard constant cracking noises and were puzzled to the whereabouts until I ventured outside and saw something familiar fly past. The next door neighbours bamboo trees were taking a pounding.

Not an admirer of this particular plant I was pleased to see something good coming out of our discomfort. After several trips upstairs to empty the bucket, the winds began to abate and around 4-45am our feelings of trepidation were relinquished. Eight hours of nervous tension during a cyclone is enough for any mere mortal, but one’s inquisitive nature has to go that one step further.

Camera in hand we drove through the tree strewn streets ,weaving in and out until a fallen powerline ahead, blocked our progress. Choosing an alternative route we continued to the Shute Harbour Lookout.

On arrival the scene was devastating. Boats sinking, some washed up on rocks, others had collided and many forced into the mangroves.

The Maxi Yacht Ragamuffin had suffered damage as it careered into a pier, and several charter boats had collided mid harbour and remained stuck fast to each other as if in some strange embrace.

We decided to drive into Airlie Beach and on the way many more yachts were seen stuck fast in the mangroves along the foreshore at Shute Harbour. We spotted Maxi Anaconda smashed up on the rocks near the Whitsunday Sailing Club , and a couple more boats that had come to grief but it seemed like the Airlie Beach sailing fraternity had escaped unscathed.

The town itself was in good shape and didn’t look the victim of a cyclone so we drove back home with a few snaps of the events that led us to believe that Shute Harbour had bore the brunt of the storm for The Whitsundays.

WeatherWatch.co.nz would like to thank Alf and Liz for sharing their first hand experience and incredible photos.