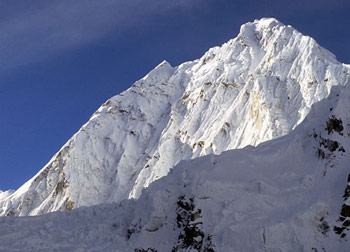 New research shows that glaciers in the Mount Everest region have shrunk by 13 percent over the past 50 years. The snow line has also retreated upward an average of nearly 200 metres.

This region has also been warming, while snowfall has been declining since the early 1990s, according to the American Geophysical Union Report.

The research team, led by Sudeep Thakuri of the University of Milan, Italy, determined the extent of glacial change on Everest and the surrounding region by compiling satellite imagery, topographic maps and reconstructing the glacial history.
Most of the glaciers in the region were also found to be retreating at an increasing rate.

The scientists specifically found that the Everest region has seen an increase of 0.6 degree C in temperature and a decrease of 100 mm in precipitation during the pre-monsoon and winter months since 1992.
The AGU report states that the decline of snow and ice in the Everest region is from human-generated greenhouse gases altering global climate. However, they have not yet established a firm connection between the mountains’ changes and climate change.
This news is obviously sobering since water from the Himalayan Glaciers, and snow melt is extremely critical to downstream populations in Asia during the dry season.