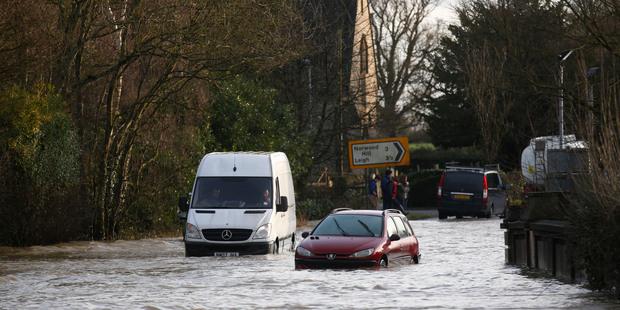 In Britain, three people died in pre-Christmas storms, including a man in Devon, southwest England, who jumped into a fast-flowing river to rescue his dog, police said. Two other deaths were in car accidents linked to bad weather.

A Russian sailor was also feared dead after falling overboard from a damaged cargo ship off the northwest French coast about 220 kilometres (135 miles) from Brest. Rescue workers called off their search late Monday.

In another incident, Swiss sailor Bernard Stamm and Frenchman Damien Guillou were rescued from their racing yacht by a Norwegian vessel. Their boat had been damaged by huge waves and Force 10 winds off the British coast, French maritime officials said.

A total of 145,000 French homes, mainly in the northwestern region of Brittany, were without electricity by early Tuesday evening, down from 240,000 in the morning, according to power supplier ERDF.

Britain’s Energy Networks Association said engineers had restored power to some 420,000 homes but 130,000 remained cut off.

Air, road and rail traffic was disrupted across France, England and Wales. Ferry services in parts of the northern Netherlands were disrupted and a number of buildings have been damaged, including the PSV football stadium in the southern city of Eindhoven.

Britain’s Environment Agency has 276 flood alerts and 162 more severe flood warnings in place, almost 120 of which are in southwest and southeast England. The Highways Agency has warned of dozens of road closures and localised flooding.

The French weather service had put 23 of the country’s 96 metropolitan departments on orange alert — its second-highest level — for high winds and waves. By Tuesday afternoon the number affected had dropped to 16.

London’s Gatwick Airport was expecting disruptions, with some flights likely to be diverted to other airports, and Heathrow Airport warned of problems and urged passengers to check flight details.

Flights to and from the northern French city of Lille were cancelled Tuesday due to strong winds but resumed later.

Some ferry services across the Channel have been halted as well as services between Scotland and Northern Ireland.

In France, rail links between the cities of Caen and Cherbourg were disrupted with felled trees blocking traffic but returned to normal on Tuesday morning. Flooding was reported in some areas such as Morlaix in Brittany where the city centre was under 1.4 metres (four feet) of water.

Rain and winds also battered Ireland, where more than 5,000 telephone landlines were out of order over the weekend due to high winds.

Several ski stations in France’s Hautes-Pyrenees and Pyrenees-Atlantique regions closed their ski areas due to strong winds as a precautionary measure.

The weather was also putting a damper on some holiday activities ahead of Christmas on Wednesday as well as sales.

Local French officials were advising the organisers of events such as Christmas markets and fairgrounds to reinforce their temporary installations.

The park of the Chateau de Versailles, the palace built by the “Sun King” Louis XIV and one of France’s top tourist destinations, was closed Tuesday due to “strong winds”, management said in a Twitter message.

“Given retailers’ hopes that the last couple of days before Christmas would see a final strong surge in sales, the awful weather could not have come at a worse time,” said Howard Archer, chief UK & European economist at consultants IHS Global Insight.

“The very wet and windy weather must have had a significant dampening impact on shopper footfall,” he added.