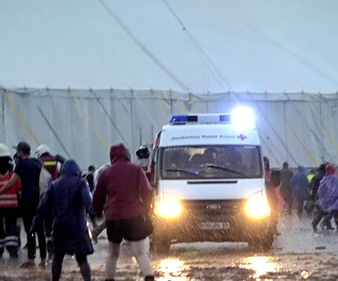 A rock music festival in Germany was halted for five hours after lightning strikes injured 71 people, and organisers urged more than 90,000 fans to seek shelter in cars and tents as another thunderstorm approached.

The sell-out Rock am Ring festival, now in its 31st year and with the Red Hot Chili Peppers and Black Sabbath headlining this year, takes place at the airport in Mendig, near the NÃ¼rburgring motor racing track.

Festival organisers told a news conference that performances would resume after the storm blew over, and said they had warned about 92,500 participants to be prepared for bad weather before they arrived.

“We are not considering cancelling the festival,” said spokeswoman Katharina Wenisch.

A spokesman for the German Red Cross said 71 people were injured during the lightning strikes in the early hours of Saturday morning, including eight who were taken to hospital. Most were now in good condition, except one man who had to be resuscitated at the scene and remained in hospital, he said.

“The festival will continue as planned,” Marek Lieberberg, who runs the festival, told fans on the event website. He said the festival would continue to issue weather warnings on its site, Facebook and Twitter.

The event website had reported early on Saturday that at least 42 people were injured, eight seriously. The numbers rose as more fans reported injuries in the early hours, according to a police spokesman.

Thirty-three people were injured by lightning strikes at the festival last year, according to German media.

Wenisch said the festival had been sold out for months.