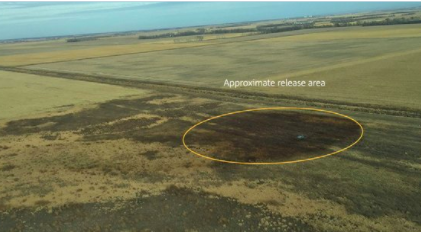 A total of 210,000 gallons (794936 litres) of oil leaked yesterday from the Keystone Pipeline in South Dakota, the pipeline’s operator, TransCanada, said.

Crews shut down the pipeline yesterday, and officials are investigating the cause of the leak, which occurred about three miles southeast of the town of Amherst, said Brian Walsh, a spokesman for the state’s Department of Environment and Natural Resources.
This is the largest Keystone oil spill to date in South Dakota, Walsh said.
The leak comes just days before Nebraska officials announce a decision on whether the proposed Keystone XL Pipeline, a sister project, can move forward.
In April 2016, there was a 400-barrel release — or 16,800 gallons — with the majority of the oil cleanup completed in two months, Walsh said. About 5,000 barrels of oil spilled yesterday.
Keystone has been a hot election topic in recent years.
– Image via TransCanada, see the CNN story below for more details
See the full story and video here via CNN.com