End of the golden run soon – but only briefly 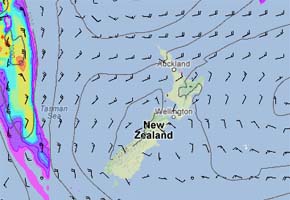 In the North Island figures are likely to be around 10 to 20mm out west with 3 to 5mm elsewhere. Some east coast parts may only get a brief sprinkling.

As soon as the low comes, it dissapears fairly smartly and then another high moves in on Waitangi Day and will give similar weather to what we have been having recently. Temperatures at the surface are not likely to be as hot though as the air associated with this second high will be a little cooler. Not to imply cold temperatures, it’ll still be great weather with very pleasant temperatures.

Long range models suggest anticyclonic weather overall until the middle of the month so it appears there’s not much in the offing for many farmers in the short to medium term.