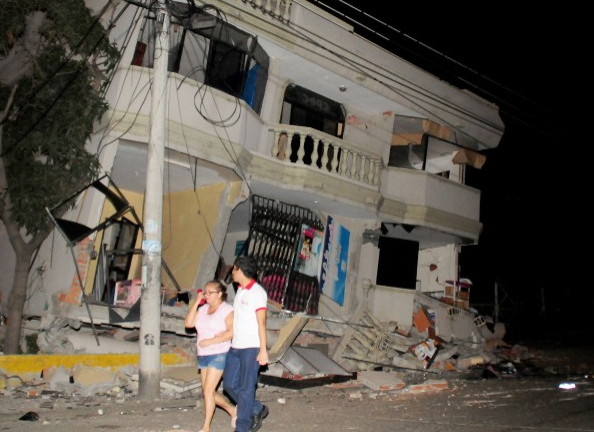 Updated 10:37am — The catastrophic earthquake that destroyed buildings in Ecuador on Saturday became far more devastating today, with the death toll soaring to 246 — and it’s expected to rise.

At least 2,527 people were injured, said Ricardo PeÃ±aherrera of Ecuador’s national emergency management office.
“It was the worst experience of my life,” survivor Jose Meregildo said Sunday about the tremors that violently shook his house in Guayaquil, 300 miles away from the quake’s epicenter.
“Everybody in my neighborhood was screaming saying it was going to be the end of the world.”
The magnitude-7.8 earthquake hit Saturday night as it buckled homes and knocked out power in Guayaquil, Ecuador’s most populous city, authorities said. Emergency officials recovered one body from the scene of a bridge collapse there.
“The lack of water and communication remains a big problem,” PeÃ±aherrera told CNN en EspaÃ±ol.
“Many highways are in bad shape, especially in the mountainous area because it has been raining recently due to (the) El NiÃ±o weather phenomenon.”
Vice President Jorge Glas had said earlier the death toll is expected to rise.
– CNN and AFP