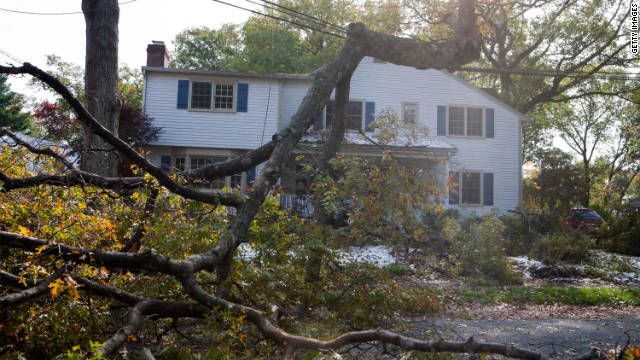 Utility companies in five states scrambled to restore power to more than 1 million people still in the dark early Wednesday after a snowstorm pounded the Northeast over the weekend.

A massive snowfall that started Saturday downed trees and power lines, knocking out electricity to customers in various states, including Connecticut, New York and New Jersey.

New Jersey resident Becky Fisher said she moved her family to a neighbor’s home after they lost power and temperatures dropped to near freezing.

Fisher, along with her husband and their 6-month-old daughter, have camped out at the neighbor’s house in Maplewood, New Jersey, since the weekend storm coated her home in snow and knocked down trees and power lines.

“There are just pockets of those who have electricity,” Fisher said Tuesday. “So we’re using our neighbors’ goodwill. We’ll owe them lots.”

“Every time I call (the state’s utility provider), they say the ticket’s open,” she said. “Initially the message (of when power would be restored) was for Wednesday night, then Thursday, and now maybe Friday.

By early Wednesday, about 178,000 people in New Jersey and 573,000 others in Connecticut remained without power, according to the states’ utility companies.

In Massachusetts, about 228,000 were in the dark while thousands also lost power in New Hampshire, Maryland, Virginia and West Virginia, according to power companies in those states.

Elsewhere, about 63,000 customers were without power in Pennsylvania and 105,000 were affected in New York.

President Barack Obama has signed an emergency declaration for New Hampshire and Connecticut, clearing the way for federal aid to supplement state and local response efforts

Authorities reported at least 15 deaths blamed on the storm, including three in Massachusetts, four in New Jersey and another four in Connecticut.