Home > News > Dunedin residents wake to the smell of s...

Dunedin residents wake to the smell of smoke: Forest fire 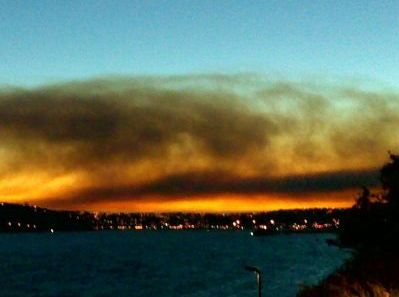 Dunedin residents woke to the smell of smoke and the sight of smoky haze over the city as firefighters were today continuing to fight a blaze ripping through a forestry plantation inland from Mosgiel.

Some residents were evacuated last night as flames in the Wenita Forest neared houses, threatened powerlines and held up the Tairei Gorge train trip.

More than a dozen helicopters with monsoon buckets were used to fight the blaze as it continued to burn near Mosgiel through the night.

The fire, which cast a pall of smoke over parts of Dunedin and the Taieri Plain late yesterday, halted the Taieri Gorge train for more than an hour as flames jumped over the tracks.

The fire on the Mount Allan forestry block began at 3.30pm, and was believed to have been started by logging equipment working in the area, Wenita Forest Products Ltd chief executive Dave Cormack said.

The fire started in a 20ha area that had been logged, but flames had jumped into nearby pine forests affecting a further 20ha.

Forestry contractors were immediately withdrawn from the area while helicopters with monsoon buckets, taking water from the Taieri River, fought the blaze.

Principal Rural Fire Officer Graeme Still said a dozen helicopters worked until dark as it was too dangerous for ground crews to work in the steep terrain.

Three properties had been evacuated and fire crews were working to save them.

Asked if high tension powerlines and Dunedin City Council water pipelines were threatened, Mr Still said “not at this stage”.

Fire operations had broken the area into two sectors – north and south.

By early evening, they had the northern sector under control but the southern section was still a problem last night.

In the southern sector, the fire was “spotting”, or jumping, up to 300m at a time due to the slope and winds, he said.

The wind was blowing up to 27kmh in the afternoon, but had dropped in the evening.

Fire crews would be at the site for a “couple of weeks” as they worked to put the fire out.

Fire crews were on standby to head to the site at 7am today to tackle the hotspots.

Smoke covered the Taieri Plain, causing flights to Dunedin International Airport to be rerouted and spectators to drive to the start of the Pineapple Track for a closer glimpse.

Mount Allan Rd from the Taieri Plain was closed yesterday.