Home > News > Dry weather concerning some in the east ...

Dry weather concerning some in the east (+5 Maps) 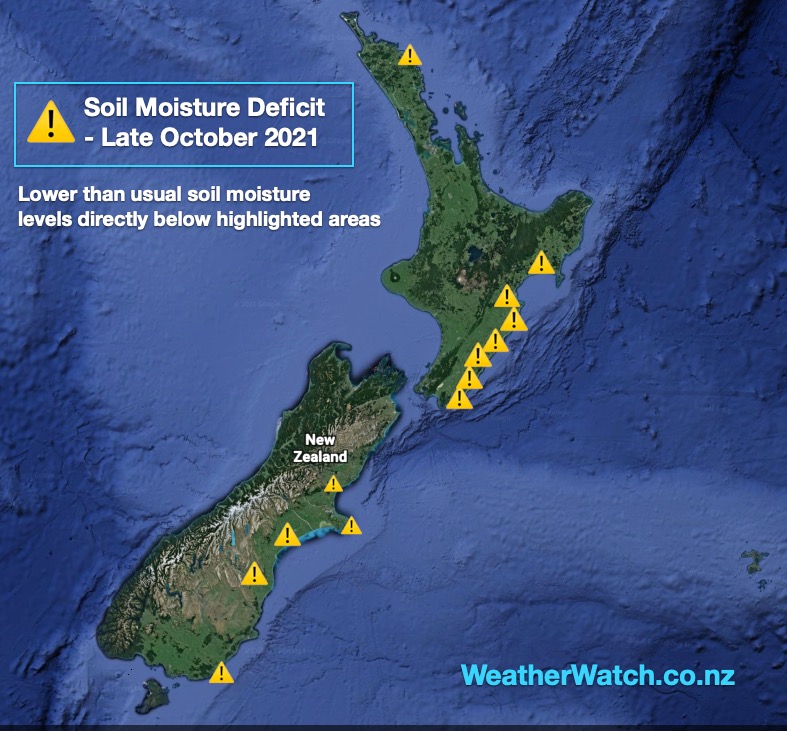 Updated Saturday to include rain maps — Eastern NZ has had four years in a row with drier than usual weather and while some rain has returned in recent months, much more is needed.

The latest soil moisture map produced by WeatherWatch.co.nz shows the main dry areas are now lining up in the east from Northland right down to Southland. Northland and Southland have both had plenty of rain in recent months, but some small pockets have missed out. For the most part, these two large regions at either of the country are doing better rainfall wise than recent years.

Canterbury (around Ashburton) is leaning drier than it should be, as is Wairarapa and Hawke’s Bay in the North Island.

Some rain is forecast in the coming week – and a set up next week with a northern low producing wet easterlies into the North Island may produce some locally better falls (but is not yet locked in).

One positive is that despite the remaining dry zones, rainfall has returned to Auckland, Northland, Waikato and Bay of Plenty – four other very dry regions for the past four years.

Of course, soil moisture measures rain on the surface of the soil – these maps below don’t take into consideration the significant rainfall deficit that may be affecting aquifers and water storage dams across the North Island in particular.

We had 11mm last night and then 22 late this morning which going to grow grass for a little while. Our vineyard irrigation bore was always 3 meters to water level in winter but this winter it was 12.8 meters down to water. Perhaps this will be the year we pump the aquifer dry.

Hi Andrew, thanks very much for that local feedback. That’s quite the difference… here’s hoping we can get some better rainmakers out your way in the coming weeks/months.
Cheers
PD