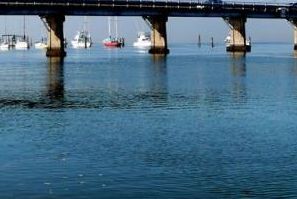 The death of a Nelson man who fell into near-freezing water while he was drunk on his boat highlights the “little known” fact that sudden immersion in cold water while drunk can result in immediate cardiac arrest, a coroner says.

Coroner Carla na Nagara today released her finding into the death of 65-year-old Colin Robinson, who spent half his time living on his boat moored at a marina at Havelock, between Nelson and Blenheim.

On the night of June 24 last year Mr Robinson got “very intoxicated” at farewell drinks for a person leaving the area.

“When he left the hotel that night, it was probably the most intoxicated that I have seen Colin,” hotel worker Lois Ryalls told the coroner.

No one saw him leave but CCTV footage of the Havelock marina carpark showed Mr Robinson’s vehicle arriving before the car’s occupant got out and fell heavily onto the ground.

He was then seen staggering and attempting to get an object from the ground.

Nine minutes later he was seen walking onto the jetty.

The next day a man selling Mr Robinson a dog went to the boat to talk about it but Mr Robinson was not onboard so he left.

He returned twice over the next two days before police were notified.

Mr Robinson’s body was found in about 3m of water at the marina.

A toxicology report found Mr Robinson had a blood alcohol level of 242 milligrams per 100 millilitres of blood – three times the legal driving limit.

An autopsy report by Dr Graeme Taylor found Mr Robinson did not drown in the conventional fashion because no foam or water were found in his airways, meaning he either died before entering the water or died very suddenly on entering the water.

The water temperature at the time was somewhere between 1.9C and 2.3C.

Dr Taylor said it was most likely that Mr Robinson died as the result of falling into cold water while intoxicated,

“There are multiple accounts in the forensic literature of people dying very suddenly after falling into cold water when drunk.”

Coroner na Nagara concluded that Mr Robinson made it back to his boat but after turning the heater on in the cabin he returned to the deck and fell into the water.

He died of a cardiac arrest.

“While Mr Robinson’s death may be considered an accident in that it was unintended and unexpected, I cannot avoid the observation that the death was avoidable and would not have happened had he not been drunk,” she said.

His death demonstrated the risk of drinking while on a boat, as well as the “little known” fact that sudden immersion in cold water while intoxicated could result in immediate cardiac arrest.

His death was the realisation of the significant risk implicit in being drunk on a boat, even when the boat is moored in the relative safety of a marina, Coroner na Nagara said.