Home > News > Drenching for parts of the North Island,...

Drenching for parts of the North Island, but others miss out as big cool high rolls in (+6 Maps) 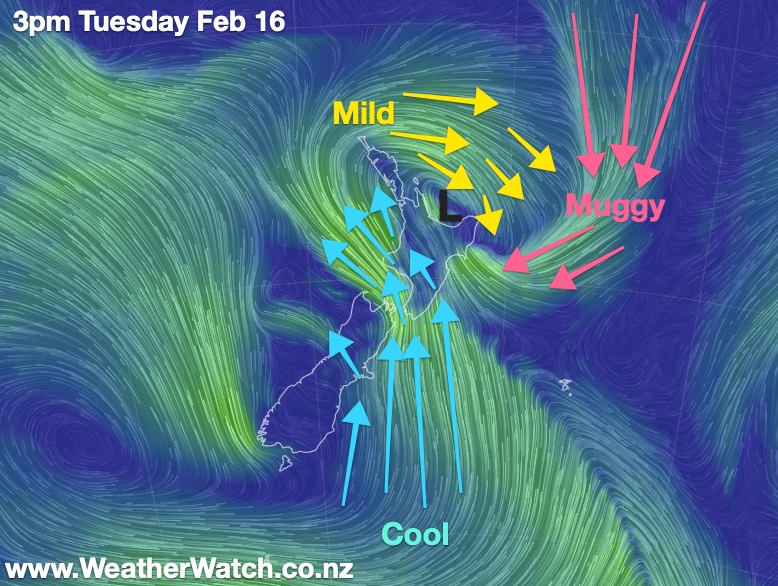 A sub-tropical low is starting to weaken around the Bay of Plenty region Tuesday afternoon as high pressure expands from south west of New Zealand.

The incoming high is a powerful one and will cover the entire country for a few days from later this week and across the weekend. As the high rolls in a cooler southerly flow is spreading up the nation.

Rain is continuing around some parts of the North Island but the cooler southerly change is now moving in and this is helping ease rain in many places.

It’s been a positive outcome for many needing rain in northern New Zealand, now going into drought. For some, well over a month’s worth of rain has fallen. One figure posted to WeatherWatch.co.nz today was from “Geoff” who had recorded 230mm at a location between Waihi and Whiritoa. He says this was recorded from 4am Monday to 9:30am Tuesday. The sub-tropical low pushed in easterly rain that was enhanced by the Coromandel and Kaimai ranges for those along eastern Coromandel/western Bay of Plenty.

A number of people have had rainfall over 100mm in the upper North Island, with the majority in the 30 to 80mm mark.

But some further down into central and southern Hawke’s Bay fell short of the rain band which stopped moving southwards today as the southerly and incoming high moved in.

Apart from Bay of Plenty, East Cape, Gisborne and northern Hawke’s Bay, the next 7 days ahead leaner drier than average (with those regions also falling into this category in another day or two).

The cooler change will also turn cold tonight as the incoming high locks in the cold air. The Frost Forecaster at www.RuralWeather.co.nz is showing some frost risks, as places like Gore drop down to just +1C overnight tonight.