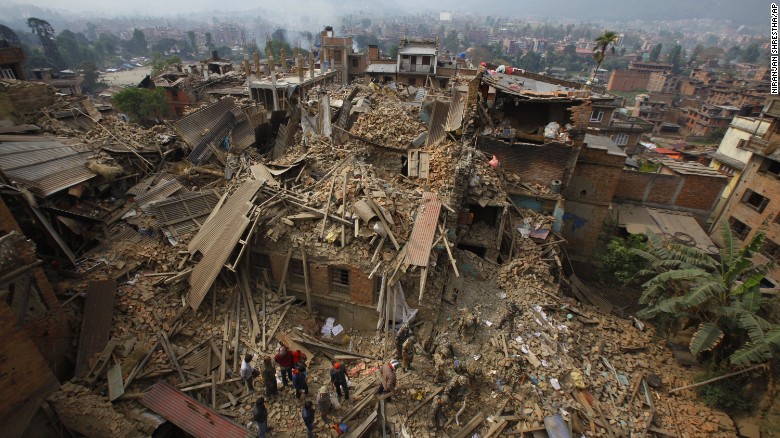 The death toll in Nepal from the devastating earthquake that struck two days ago has risen to 3,218, Nepalese Ministry of Home Affairs spokesman Laxmi Dhakal said Monday. The spokesman said there were reports that the number of people injured now stands at 6,535.

They dug through rubble, looking for survivors but usually finding bodies. At night, they slept in open fields in the frigid night air. Food and clean water became rarities, uncertainty and fear constants.

On Sunday, Nepal began coming to terms with the death and devastation left by earthquakes and aftershocks. At least 2,430 people died in Nepal alone, and that number is sure to climb. Counting fatalities in India and China, more than 2,500 were killed.

The damage was everywhere. Stunned residents wandered the streets of Kathmandu, the capital city of 3 million people that’s now the focus of world disaster relief efforts. They dug through piles of rubble where their homes once stood, seeking pieces of their former lives and, possibly, family members. Many injured were treated outside overflowing hospitals, where crowds of people gathered looking for relatives.

One of the world’s most scenic spots became a panorama of devastation in minutes.

A view of Katmandu after the Nepal earthquake http://t.co/YOI8m5A7uQ via @nytopinion pic.twitter.com/HXzsvns33U

“The journey towards my family home in Sitapaila was a map of quake destruction, with many houses — old and new — torn apart,” wrote freelance journalist Sunir Pandey. “A high wall surrounding a monastery had collapsed and the nuns had run to a nearby field. A mud-and-brick cottage had fallen on a blue motorbike but no trace could be found of its rider. Everywhere, survivors gathered wherever they could find open space — fields, private compounds, empty roadside lots.”

A woman cries on Sunday, April 26, while identifying the body of a relative in Bhaktapur, Nepal. A magnitude-7.8 earthquake Saturday, centered less than 50 miles from Nepal's capital, Kathmandu, left widespread destruction and death. Click through the gallery for more photos:

At night, many Nepalis slept in the open, shivering in the frigid air of the Himalayan Mountains but at least safe from falling debris. One visitor decided not to.

“The entire city was under darkness,” Christina Berry of England wrote for CNN affiliate IBN. “There was not a single light anywhere. The power supply had been cut off. Our caring hotel manager gave us some food and some candles, too. Me and Alexandra were so scared. We slept in the open verandah of the hotel fearing more quakes in the night.”

Video emerges of the moment when the quake-triggered avalanche hit base camp at Mt Everest. http://t.co/GMciDk92xz pic.twitter.com/Ks2QQsZX2s

CNN producer Ingrid Formanek, who arrived Sunday night, said Kathmandu “looks like a city where buildings have been abandoned. People are hanging out in public squares and at intersections to avoid rubble from buildings.”

“We were able to drive the main road to the hotel we’re staying at, but they’re not allowing anyone inside because of the aftershocks. The guests are in a big tent used for functions on the lawn. People are squeezed in. There are probably about 100 people in there,” Formanek said. “The tents are covered, but water is seeping in from streets puddled with water, especially around the edges of the tent. “

Many of the city’s centuries-old buildings, which had stood stalwart for generations and provided a sense of national pride, have been toppled.

Dozens of bodies were pulled from Dharahara, the historic nine-story tower that came crashing down during the quake. A backhoe chipped away at the nub left protruding through its crumbled ruins.

When it seemed as if things couldn’t get worse, a powerful aftershock jolted Nepal on Sunday, sending people screaming into the streets and causing new injuries for already traumatized residents. Climbers said it set off fresh avalanches on Mount Everest, where at least 17 people were reported to have been killed on Saturday.

The magnitude of the new quake Sunday was initially estimated at 6.7 by the U.S. Geological Survey, considerably weaker than the magnitude-7.8 of the devastating one of a day earlier.

VIDEO: This is what the deadly Mount Everest avalanche looked like from base camp. http://t.co/MQ8UW9gpdc pic.twitter.com/lqiDZdZjvZ

Cheers for a survivor

Only a few bright moments occurred in Kathmandu.

A clip on Nepal State Television showed uniformed soldiers frantically digging through rubble in a tight space and slowly extracting a man in a while shirt and a green belt. They slid the man onto a stretcher and carried him down a ladder to the street below where onlookers cheered.

Many other rescues were performed by regular citizens or tourists — people dressed in street clothes who lacked stretchers and other proper tools. In one scene, four men carried an injured man in their arms while a fifth man ran beside the group, fanning the man’s face with a magazine.

Formanek said people are banding together in other ways, with stores shuttered and very few sources of food and drinkable water.

“Communal kitchens have been set up for cooking. Not by the government — people set them up on their own,” she said.

The death toll is expected to rise as the full extent of the damage emerges. It’s difficult to know how many people died in the rugged countryside that makes up most of Nepal.

Three of the dead are U.S. citizens, a State Department official told CNN on Sunday, while offering “deepest condolences to the family and friends of the victims.” The State Department didn’t provide any names, but we’ve learned two of the three.

Google executive Dan Fredinburg was one of the Americans. According to an Instagram post by his sister on his account, an avalanche killed Fredinburg on Mount Everest.

Eve Girawong of New Jersey also was killed by an avalanche on Everest, according to Madison Mountaineering, the Seattle-based company that led her expedition. Girawong was at the Everest base camp when she was swept away to her death.

In neighboring India, the death toll has reached 56, most of them in Bihar state, said Lt. Gen. N.C. Marwah, a senior official of India’s National Disaster Management Authority. Also, 17 Chinese nationals died in Tibet, according to Chinese state-run news agency Xinhua. These figures bring the overall death toll to more than 2,500.

The loss of life reported so far “is really based on the information we have from the main cities,” Lex Kassenberg, Nepal country director for CARE International, told CNN. “But if you look at the spread of the earthquake, a lot of the rural areas have been hit as well. The information we received from the field is that 80% of the houses in these rural areas have been destroyed.”

The mountains that define Nepal make it difficult to deliver relief, though international efforts are in full swing. Aftershocks are also complicating operations.

A team of 260 emergency responders was about an hour away from departure at Israel’s Ben Gurion Airport when an aftershock in Katmandu delayed its departure.

The U.S. Agency for International Development’s Disaster Response Team, made up of 54 urban search and rescue specialists from Fairfax County, Virginia, and six K-9s, headed to Nepal on Sunday on a C-17 military transport plane. The dogs are trained to find signs of life in rubble after a disaster.

But the trip was expected to take about 24 hours. How long can a person survive trapped in building rubble after the original earthquake on Saturday?