Australia’s Bureau of Meteorology is warning Queenslanders to brace themselves with gales expected within 24 hours as Tropical Cyclone Ului heads towards land.

Head weather analyst Philip Duncan says the cyclone is still destructive. “There is almost no difference between a strong category 2 cyclone and a weak category 3. This storm still has the potential to be very destructive as makes landfall in an area well known for it’s tropical beach resorts, banana plantations and sugar cane crops”.

However the storm has weakened even further this evening with winds now only gusting to 140km/h.  “While damaging it isn’t expected to be one for the record books” says Mr Duncan.  “Isolated regions may still see severe damage.  It’s still a dangerous storm”.

Mr Duncan says the fact that the storm has sped up from 4km/h to 15km/h in the past day or so means that winds ahead of the front will be more damaging.  “This will add to the pressure gradient in front of the storm but should lessen the impact of what follows after the centre makes landfall”/

WeatherWatch.co.nz will provide extra online updates on Saturday evening and from early on Sunday NZT as the cyclone makes landfall near Bowen where the 2008 epic movie “Australia” was filmed.

Bowen is likely to see a direct hit.  The town is home to 7500 people.

“Winds these strong could cause damage to the many beach resorts in the area, not to mention the possibility of damage to banana plantations and sugar cane crops” says Mr Duncan.

Mr Duncan says the storm may also cause damage to the fragile reefs surrounding the coast.

Current computer models show Ului will make a direct hit to the Whitsunday Islands and the towns of Proserpine and Bowen.  Populations of the two towns is 11,000 with many tourist towns and resorts in the area.

The town of Bowen was one of the main centres that the 2008 epic romance film “Australia” was filmed in.  The movie starred Nicole Kidman and Hugh Jackman.

Latest information on Ului from the Bureau of Meteorology, Australia.

Tropical Cyclone Ului, category two intensity, is moving to the southwest towards the Queensland coast.

The most likely scenario is for the cyclone to cross the coast Sunday morning between Cardwell and Mackay and it may remain at category 2 intensity by landfall.

Damaging winds should develop between Ayr and Yeppoon later on Saturday, then increase further and extend to Cardwell and to adjacent inland parts on Sunday morning as the cyclone nears the coast.

Seas and swell are expected to increase along much of the Queensland east coast. Dangerous surf conditions are expected to develop about exposed beaches south of the cyclone tonight and Saturday. A separate Severe Weather Warning is current for these conditions. 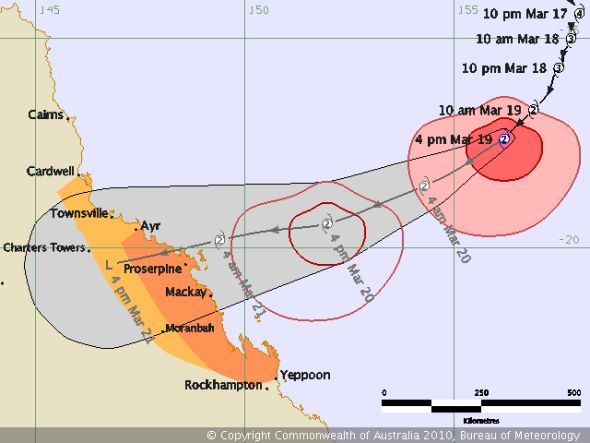