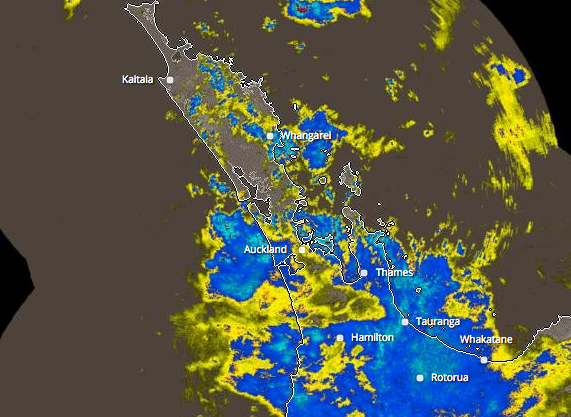 Slow moving and intense rain bands have dumped over a months worth of rain in some parts of Auckland overnight.

No rain warning was issued for Auckland but rain has been intense enough to cause slips and flooding in parts of the city – while others missed out on the heaviest falls.

This morning the rain clouds are breaking up and dry spells will increase – but as the sun rises this may trigger some bigger build ups and downpours (but more isolated).

As we forecast yesterday thunderstorms were unlikely overnight – however this morning a few are flaring up out at sea and north of the city.

WeatherWatch.co.nz said yesterday in a news story about the incoming rain “Flooding will only be an issue if the rain bands stall anywhere” – which is precisely what happened around Auckland. The rain didn’t linger as long in Northland – it tracked southwards then stalled over some parts of Auckland, Waikato, Coromandel Peninsula and western Bay of Plenty.

Powercuts have also been reported from Bay of Plenty to Auckland.

Despite the rain it hasn’t been overly stormy. This is not a weather bomb nor is it a tropical storm, as some media outlets have said today. However the big low in the Tasman Sea will linger until Monday with more heavy rain possible, especially as it crosses the country. In fact latest guidance suggests rainfall totals will be higher than we previously mentioned. There will still be dry spells in the mix – but we have a lot more rain coming before this low is finished with New Zealand – especially northern areas.