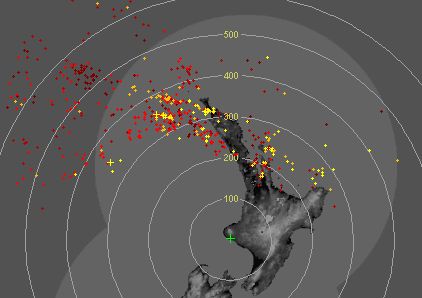 UPDATED — 7:19pm.  Thunderstorms are this evening moving into eastern Coromandel Peninsula and Bay of Plenty as the centre of a shallow but active low starts to cross the upper North Island.

The free and live Lightning Tracker has shown an explosion of activity this evening to the east of Great Barrier Island and the Bay of Plenty region.

Bay of Plenty has been badly hit by flooding and slips this winter and tonight’s torrential downpours and thunderstorms have the potential to create more seriou localised problems.

The low is currently centred just west of Auckland City over the Tasman Sea and will cross by the city tonight.

Yesterday three houses in Whakatane were hit by lightning and head weather analyst Philip Duncan says residents across the Bay of Plenty region should expect possible sudden and dangerous weather overnight.  “This low may seem gentle but it’s got quite a nasty side to it.  The clouds are building and thunderstorms are growing.  Some areas may receive sudden squalls with damaging gales, possible tornados and cloud to ground lightning”.

Mr Duncan says the risk for Northland and Auckland has eased this evening but remains high for Great Barrier Island, Coromandel Peninsula and Bay of Plenty.

He says waterspouts are a possibility too along with sudden torrential downpours which could make driving difficult and could cause localised surface and flash flooding.  Landslides are also possible following record breaking rains over the past two months.

Long dry spells are also in the mix, showing that showers and thunderstorms are isolated – but still serious.

The risk should ease overnight but more heavy showers with isolated thunderstorms are possible again later tomorrow in the upper North Island.

Over 6300 strikes have so far been detected today with about 800 in the past 60 minutes alone.

Any chance you could explain what the ‘New strike symbols’ stand for on the lightning tracker?
I know Skywatcher provide this addictive site, but I would love to know what all the coloured symbols mean, or else I assume they are to do with positive,negative, cloud to ground, cloud to cloud strikes??
I realise the coloured dots are to do with how old the lightning strike is.
As for getting a better rain radar, when you see how good the ChCh one is, you realise what we are missing out on. Do we have to wait for a natural disaster to have this service provided?

Hi Melissa – yep you’re right with the symbols, CG is cloud to ground and CC is cloud to cloud, then positive and negative.  However from what we gather those elements of the tracker aren’t currently accurate – just the location of the strikes.  We know they are working on growing the network and hopefully WeatherWatch.co.nz can help them in the future with this too.

With regards to the radar network, yes it is VERY frustrating that this vital public safety service is not fully available to the public for free.  It is kept at limited images to maximise revenue for the MetService/Government.

Lobby your local MP to get it changed.  We’ve already started the ball rolling by formally complaining to the Minister of SOEs and lodging our concerns with MetService.

There is lightening out to sea, just starting to rain again; might get more !

I live in Dargaville…are these storms goin to hit us? And if so approximately when? We’ve had patches of heavy rain for the last week or so.

Hi there – looks like most of it went to the north and east of you today.  Could be a chance of thunder again tomorrow afternoon as the back end of the low comes through.  Today’s thunderstorms were fairly scattered – ie, big areas without them and spread out from Northland to Bay of Plenty.

Had some very heavy rain while driving in Orewa.

We had a good series of thunderstorms in the Waimamaku district, South Hokianga around about 1.45pm onwards. Couple of times the power flicked on an off and, in the end, I turned the puter off to play safe. The lightning here can be very low due to the topography and we get more than our share of power transformers being hit, let alone the damage caused to underground telephone cables.

You are using the word DANGEROUS….If these thunderstorms are so dangerous why can’t we acces better and more detailed lightning trackers like everybody else in the world. I assume you have acces to these lightning tackers….

Actually it’s radar imagery that we want the government forecaster, MetService, to free up to the public – but the government demands they make a significant financial profit each year – so, for now, you can’t have free, full, access to the radar network (and neither can we unless we pay big bucks).

We are currently working with MetService to try and find a half way point – if they won’t provide this service for free to the public WeatherWatch is looking to how we can raise the funds to do it ourselves (ie, paying MetService to give us the radar images to put on WeatherWatch.co.nz).  It’s slow going but we have a good contact at MetService now who is working hard with us to find a solution which we both benefit from.  Not the way we’d like to do it but we believe the public safety issue easily outweighs the cost.

I am in the Mount and didn’t hear any thunder – heavy rain, but no thunder?