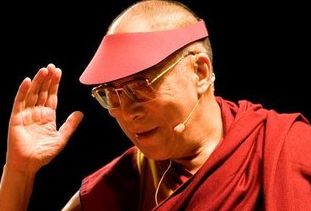 The Dalai Lama has told Christchurch residents the city needs to look forward from the sadness of the past few months.

The Tibetan spiritual leader arrived in Christchurch just after 12pm today, as part of a visit to see the destruction caused by the February earthquake firsthand.

A crowd of about 50 people were waiting at the airport to greet him, forming a line to offer Khatas – traditional ceremonial flags used in Tibet.

Speaking briefly before he was led away to a waiting car by police and personal security officvers, the Dalai Lama said the city had to look forward from its sadness and work hard to rebuild the town.

He stopped to speak directly to Dunedin couple Losang and Sally Dawa, who told the NZ Herald that he recognised them from meeting them in India in the past.

They said his Holiness had asked about a teacher in Dunedin who had recently passed away, saying this was a “very nice gesture” on his part.

Those sentiments were echoed by Christchurch woman Elaine Dobson, who was also waiting at the airport to greet the Dalai Lama.

She said the city was extremely fortunate that he had decided to visit.

“He exudes some wonderful feelings. You can’t help but pick up on those.

“He is an exceptional person and I think he is going to be able to do a lot for the people who have suffered here.”

Dalai Lama Visit Trust NZ spokesman Neil Cameron said last week the Dalai Lama had very fond memories of his previous visits to Christchurch and had requested the opportunity to visit the city ahead of his 10-day Australian tour.

He will speak publiclly at a free event at the CBS Arena in Christchurch tomorrow at mid-day.