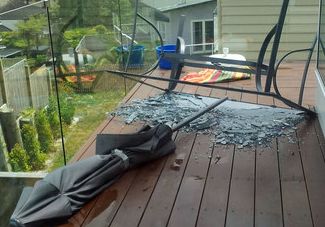 Strong winds in Auckland have brought down trees, cut power to hundreds of homes and prompted a warning to drivers as ex-Cyclone June lashes the upper North Island.

There have been strong gusts of up to 90km/h at Auckland airport and gusts of 100km/h in exposed parts of the Hauraki Gulf & Manukau Heads in the Auckland region.

A Fire Service northern communications spokeswoman said there had been about nine callouts before the wind picked up in Auckland, and fewer than 10 since.

“Trees on roofs, on cars, on power lines, roofs coming off – that sort of thing.

But it’s dropped off a bit. We were steady for about half an hour, probably about 3pm.”

Among the jobs were a tree on a roof in Panmure, a tree on a house and power lines in Epsom, and a tree on a car. All had been dealt with quickly.

Lines company Vector said 1856 customers were without power due to four weather-related outages in the northern part of the network.

The New Zealand Transport Agency is urging motorcyclists and high-sided vehicles to take extra care on the Harbour and Mangere bridges due to strong winds.

WeatherWatch.co.nz says the centre of the low was over Auckland this morning, which is why it was so calm when people woke up today.  Now the centre of June lies near Bay of Plenty and the Central North Island. By tomorrow it will be out to sea east of Wairarapa.

The strong winds would move to Tauranga and the eastern Bay of Plenty this evening as the low moved east of the North Island.

This heavy metal table in the Auckland suburb of Hillsborough was a victim of the wind gusts. Photo / Nakita Daniel

These high winds have been coming for a couple of days now and enough warning has been given that people should have had the common sense to take umbrellas inside and not park cars under trees. The roof tops peeling under high winds i can understand but come on people… sharpen up…

Been watching one next door to me, luckily not smashed yet! People seem unaware of the power of the wind!