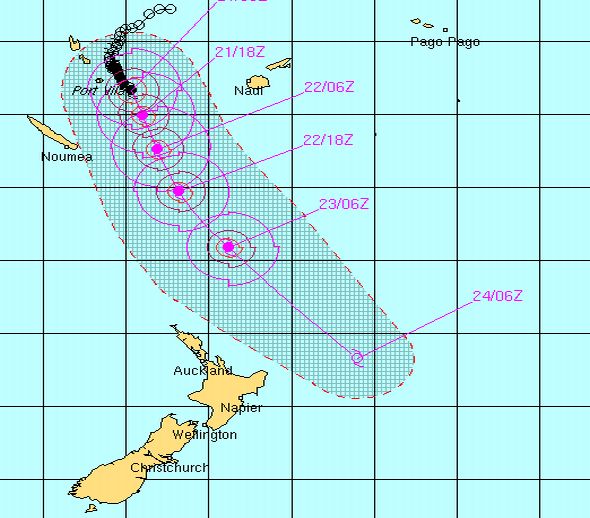 As of 7:50am NZT there were two tropical cyclones active over the New Zealand and Australia region.

It can clearly be seen on our satellite map (to the right of the page) directly north of New Zealand.

As we’ve been predicting for nine days now we still expect Atu to pass quite close to East Cape but far enough away avoid bringing severe weather to New Zealand.

WeatherWatch.co.nz says that Cyclone Atu appears to be stronger than Wilma which hit northern New Zealand on Auckland Anniversary weekend.  Atu is also likely to be a stronger cyclone when it reaches close to us but thankfully won’t be hitting us.

There are currently no models that suggest a late turn towards New Zealand and certainly the current weather pattern doesn’t allow for this, with high air pressure over the North Island.

Meanwhile Tropical Cyclone Carlos has ignited again on Australia’s western coastline.  The cyclone, which formed originally just 3kms from downtown Darwin, is this morning still a category 2 cyclone and continues to hug the coastline.

When Carlos first developed WeatherWatch.co.nz predicted it was likely to reignite over time and reach category 2 status.  The cyclone will affect a number of west coast towns (see map below).

And further west, well out to sea, is ex-tropical Cyclone Dianne, and she continues to weaken and will eventually be swallowed up by stormy skies over the Southern Ocean.

WeatherWatch.co.nz says that conditions around north western Australia will remain active for another 10 days at least meaning another tropical storm is possible in the coming week, however on this side of Australia Atu will be draining energy from north of us, so expect quieter conditions in the tropics over the next 5 days at least.

My problem with you’re prediction and model is, does it cater for Tropical S’s on both side of the high to the South of Aus currently touching the North Island. Carlos is moving SW stretching that high more each than the model would normally predict with a fairly normal but still huge L at the South coming from the poles pulling it a bit South, I think there is a big chance it might pull the H more SW than expected in you’re model, Also the L to the E of NZ currently can pull the H to the east of that in the pacific more to the west than the model predicts, slawing down Atu and pushing it more S than E. I’m guessing there might be a stronger chance of a fuller brush than the computer model suggest because of this, just my thought!

Thanks for your thoughts.  It’s certainly busy our there at the moment!   The cyclones don’t actually "stretch" the highs.  They are fairly unrelated…so the lows will either go around the high…or they will be torn apart by the high.  Either way, the highs tend to be in control of their track.  Atu will be close but just far enough away to not affect our weather to much.