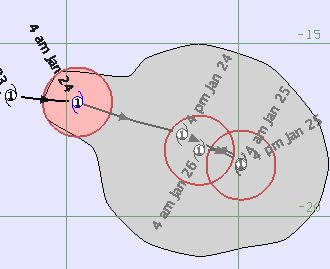 Tropical Cyclone Anthony, which formed into a category one system on Sunday morning, is unlikely to threaten the Queensland coast, at least in the next few days.

On Sunday, Anthony was moving fairly swiftly to the east, away from the Queensland coast.

In the next few days, Anthony is expected to move further east, away from the coast as he intensifies, and as a result poses no immediate threat to Queensland.

There is a chance of Anthony doing a u-turn later in the week, which some computer models are indicating, and this would make things interesting come next weekend.

If Anthony does “chuck a u-ey” and get close to the coast, he will cause winds to strengthen and swells to increase along the Queensland east coast and possibly bring some rain.

The rain may have an impact on flood-ravaged areas of central and southeast Queensland.

Anthony’s tracking takes him away from the Queensland coast, but note the location on 26th, indicating Anthony will do a U turn and head back towards Queensland by the weekend or into early next week.  Graphic / Bureau of Meteorology