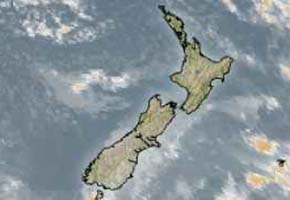 Over the North Island there are many cloudy areas with a little sun here and there, showers at times also some briefly heavy in Waikato, Taranaki and western parts of the Central North Island. After some cloud this morning the east coast has come out sunny with light winds although some cloud still hangs around Wairarapa.

Temperatures are around the mid teens for many places although about Taranaki, the Central North Island and Wellington it is currently between 11 to 13 degrees.

Areas of cloud on the West Coast and about Nelson today, winds are light. On the east coast there are cloudy skies and a band of rain is starting to move in after a slightly drier spell this morning, about eastern Otago showers continued this morning however. Areas of rain will be heavy at times along this band particularly in South Canterbury and coastal Otago from this evening, also the foothills of Mid and North Canterbury.

The main issue around Christchurch currently is that everything is so water logged it won’t take much rain to cause further issues even though the rain itself may not be too heavy about the city today, it will be persistent though lasting from now on through till Wednesday morning before clearing.

We are having continuous rain. It has continued unabated all day! No, we did not diminish to lighter showers in the morning. I can vouch for . I live here and work outside as a gardener and groundsman. I recorded 62mm from Sunday( when the rain started) to 8.00am this morning. I have recorded an additional 45mm up to 5.00pm today( bringing the running total to 107mm) and it is still pouring.
This, by the way, is the followup rain that I have been looking for and I would imagine, many in the Otago hinterland south of the Kakanui’s. Met. Service are forecasting this rain to peter tomorrow. They have been spot on with their forecast to date.

Apart from the national forecasts each morning we don’t currently have funding for Dunedin specifically but WeatherWatch is working to broaden the centres it forecasts for and cater to them more specifically.

Since Sunday we have forecast periods of rain about Coastal Otago and heavy bouts at times in the morning national forecasts so it’s no surprise you’ve recorded alot of rain.

The showers I wrote about this morning I was basing off images which didn’t look too bad.

It must not be able to pick up the heavier rain due to the hilly nature that is Dunedin. Thanks for your note about that.

Actually thanks to your post here I’ve managed to track down a site with up to date rainfall figures so that will help indeed.