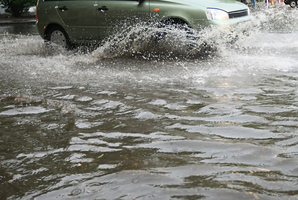 Travellers are being urged to avoid the east coast of the Coromandel as heavy rain has brought flooding to many coastal communities, police say.

Overnight heavy rain, which was still continuing, had resulted in several areas being flooded and a number of slips, officer in charge of Thames-Coromandel road policing Sergeant Jim Corbett said.

Some campgrounds have been evacuated.

“Flooding has been reported in Tairua, Pauanui and Matarangi, Whitianga and a number of other locations with camping grounds at Opoutere and Cooks Beach flooded.

“The community hall at Cooks Beach has been opened to accommodate evacuated campers.”

The eastern coast of the peninsula appeared to have been hit the hardest with the area having just reached high tide, which had compounded the issue, Mr Corbett said.

“Our advice to people intending travelling to the area is not to, at least for the next three hours and to monitor the NZTA Highway Information website.”

Drivers who still needed to use Coromandel roads should take “extreme care” even after the rains have stopped, Mr Corbett said.

“There will still be a lot of water on the roads and the key thing will be to take care and watch your speed.”

The Fire Service has tweeted that the town of Pauanui was especially hard hit by the downfalls.

“Firefighters reporting the entire town has flooded but rain seems to be easing.”

Areas affected by the flooding:

* SH25 Kuaotunu-Wharekaho Rd on the Whitianga side of Kuaotunu Hill;