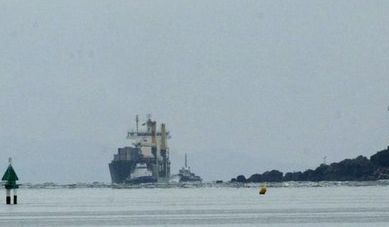 Engine failure is thought to have caused a container ship to crash into rocks at Mount Maunganui in the Bay of Plenty.  WeatherWatch.co.nz says weather conditions at the Mount today are fairly calm with good visibility but mostly cloudy skies.

Port of Tauranga said the 133 metre container ship Schelde Trader hit rocks as it was exiting the port 10:35am.

No oil was observed in the water and there was not thought to be any risk of a spill.

Operations manager Nigel Drake said it seemed the incident was due to mechanical failure rather than human error, he said.

Something had gone wrong with the engine of the ship before it hit the rocks, he said.

Maritime New Zealand spokesman Ross Henderson said the vessel was at secure and there were no reports of injuries to crew.

“They’re saying the damage to the ship has been superficial but they’re getting that seen to right now,” Maritime New Zealand said.

The port said the ship is now under the control of tugs outside the harbour entrance.

It will be brought back into the harbour for inspection.

The Maori Party has called for an inquiry into coastal cargo in the wake of the incident.

Foreign vessels needed to have a New Zealand pilot on board at their cost, he said.

“Bottom line is that the Rena disaster has shown that we need to review our capacity to respond to incidents which have the potential of incurring horrendous environmental and economic consequences.”

The Schelde Trader had lost power and ran aground just north of North Rock, around the base of Mount Maunganui after leaving the port.

The incident comes nearly a month after the cargo ship Rena ran aground on Astrolabe Reef off Mount Maunganui.

It spilled 350 tonnes of oil on the area’s pristine beaches, killing more than 1000 seabirds and sparking a lengthy and expensive clean up operation.