Column – Winter is not my fave 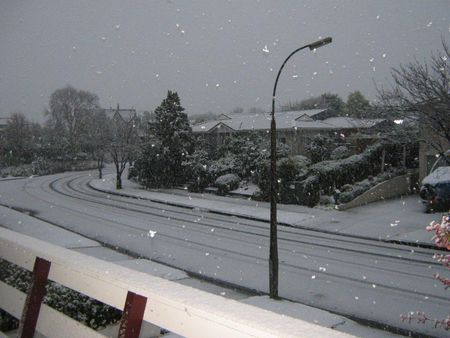 Column by Canterbury weather enthusiast and media writer Beck Eleven – The axis is tilting, we must say farewell to the big fireball in the sky. An autumnal chill is in the air, giving way to a vision of snow-capped alps while leaves turn deep orange indicating change is upon us. Autumn and winter inspire such poetic thoughts.

But I bloody hate it. I disagree entirely with cold weather. Winter apologists will tell you it’s great because of ski season and this fashion of “layering” but the only favourable thing for me about winter is bacon and that doesn’t really even make sense.

I do like wearing winter hats but I lose them all too frequently and the only one I’ve managed to keep is one my best friend says makes me look like an escaped psych patient.

Cold weather makes me feel as sad as weeping morning windows in a Canterbury house.

Doctors more commonly agree there is a condition known as seasonal affective disorder (SAD) but anyone versed in the ways of hosiery know the true SAD is Stocking Affective Disorder. It is marked by a change in season where one must cover their alabaster legs in full-coverage, mega-strength, mind-the-gusset pantyhose.

They are a hell of a lot of work to wear. Let me quote from a past column.

“Climb is too concise a verb when talking about pantyhose. I actually had to frenetically dance my way into them, part-twist, part-foxtrot. The higher dernier one goes in a stocking, the more furiously one has to dance in order to encase one’s legs inside them. They put the tight into tights.

“Thank God they were black. Brown may have looked all right but any shade lighter would have made my legs look like an overstuffed pair of economy sausages.

“Frankly, it was a deeply depressing moment. It had been less than a year between stocking situations. The first day I feel cold enough to wear them is a general marker for the day I start to hate everyone until Pantyhose Season is undeniably closed.

“The tights’ waistband digs into my stomach, displacing several internal organs. Or, unable to stand stomach expansion, the waistband simply rolls downwards, lodging the rolled tube of lycra across the pelvis.”

Either way, I don’t think anyone truly understands the damage being done to the health of the nation’s women by evil stockings.

We are lucky where I am in Canterbury to experience many sunny days during winter, but with these days come frosts and the southerly bite.

Our homes are cold, our electricity bills are high and the earthquakes have not helped. I am living in a carpetless house while the landlady and EQC dispute the flooring. Staples sticking out of the floor aren’t great but at least it’s winter so I don’t feel like walking around with bare feet. I couldn’t afford the sticking plaster.

I understand there is an average of 100,000 hair follicles on a human, so imagine how many there are on the body. Perhaps I’ll grow the bits I get waxed and keep warm that way.

I’m starting to feel like one of those geriatric gems who refuse to turn on the two-bar heater because it’s too expensive: the hum of a heat pump makes me feel guilty. However, I have no issue with the electric blanket, I’m just scared I’ll wake up with a selection of over-baked internal organs.

Winter is coming and so are the ills. I had my flu jab last week but I know it will not protect me from one of those awful colds that give you the kind of scratchy throat that makes you want to shrink yourself so you can climb inside your own neck and give it a right old itch.

Then it will spread to the sinus area and I will end up thinking about my sinus with every waking thought.

Like I said, bacon*. The only true saviour of winter.

*This weekend’s column was not sponsored by bacon.

Beck, your writing made me smile, especially the waistbands tightness on internal organs or slipping.
Winter not too bad up north of the Bombays, though may need to purchase a dinghy as Councils drains need clearing of the leaves that fall and block.
May your winter snuffles not be awful!

Warmer houses would sort most of this out. Be thankful at least to not be in the UK or many other countries where winters are darker and much duller than they are anywhere in NZ.

Long pants [jeans mostly] and possum merino socks beat pantihose any day but all the rest I agree with!! I too have had my flue jab but I also indulge in a winter dose of Buccaline from the Chemist and it does seem to inhibit the cold-making germs [for me] from taking up residence. Landlords should have to have a mandatory period of residence in the houses they rent out. I look out the window at the few remaining undeniably beautiful yellow leaves on the tree outside my window and smile at the wax-eyes feasting on their fat but still feel utter depression at the speed with which these leaves changed colour and dropped off the tree…..knowing it heralds a period of intense cold in a house that has no cosy pink batts anywhere, though I am personally lucky enough to have stuff on the floor. I live close to the mountains and their beauty is the only good thing about winter really. No…merino is another good thing about winter and I visited Trademe a few years ago and got some. I have to wear many layers I must admit because I do not have a heat pump installed but at least I don’t look like a walking sausage stuffed into woollies any more. 🙂