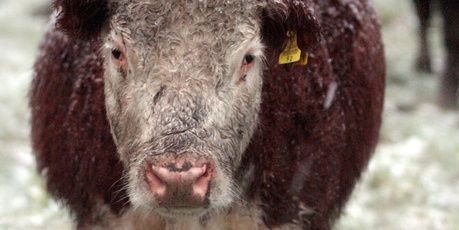 Herald on Sunday column by Philip Duncan — The wintry blast just over a week ago proved deadly for West Coast farmers who lost more than 200 cattle as a result of wind chill.

The West Coast is well known for being wet but many don’t realise just how temperate the coast is. It frequently shares similar temperatures to Auckland and New Plymouth, two other West Coast centres. However, during the snow storm an unusual wind direction meant cows froze to death in a matter of hours – in fact it was so devastating the worst-affected farmer didn’t want to talk about it.

Every Saturday morning I have an interview with Thompson, who also owns a dairy farm near Hokitika. “I’ve farmed for decades and I’ve never seen such a brutal wind chill,” he said. “The cows literally froze to death where they stood. The guy up the road lost more than 150 cattle, it’s been incredibly traumatic for them.”

We often hear of lamb deaths in winter and spring but it is incredibly rare to hear of adult cows dying from wind chill.

Other farmers across the region lost dozens of cows. “The problem is that our predominant wind is from the west, so all our barn doors open up to the east – but it was a sou’easter that hit us and so we couldn’t protect our cattle. It was one of those freak things that saw polar air roaring down this one valley.”

Locals estimated it was -10 to -15C in the wind. The high in Hokitika that day was just 5C – which is almost unheard of on the West Coast. I did my own calculations and they weren’t far off the mark. With a gale force sou’easter which brought down trees and had a still temperature in the low single digits, the wind chill would’ve been around -9C. However, more exposed areas could have seen wind chills down to -12 and below. Brutal.

“It was a howling easterly over here with horizontal ice pellets,” said Federated Farmers’ West Coast president Katie Milne told APNZ. “There were trees blown on the road and you could hardly stand up.”

But even with hindsight it was a difficult event to see coming as it was so isolated. It yet again highlights the potential deadly consequences of the weather – and that all of us must expect the unexpected.