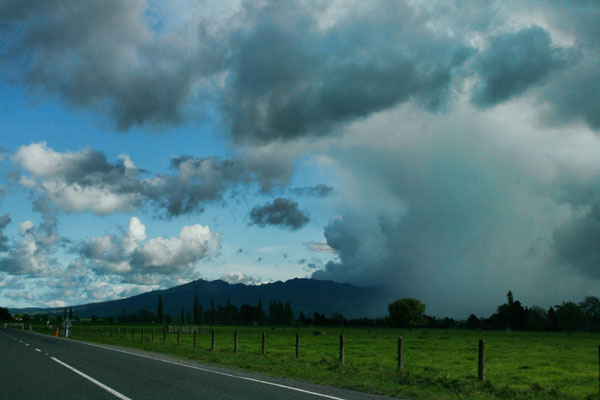 Column by head weather analyst Philip Duncan — Just a short column today, with the incoming rain I wanted to just do a quick update on the latest data we have.

It pretty much paints a picture we’ve been saying all week – that rain clouds will move in to many areas but for some farmers it may only be a tease.

We believe most regions will get rain – but in some cases it may only be a few showers or drizzle.

A few little showers are already popping up around Auckland, Wellington and other regions in between this morning.  But the air pressure over New Zealand is still fairly high, so dont expect any sudden set-in heavy rain.

These are all shifts in the right direction – but if you take a look at the rain maps in our ‘Maps’ link above you’ll note a lot of the rain looks to be patchy, light and even misty/drizzly for some.

But either way Sunday and Monday look set to bring rain, showers or drizzle to many – but the east of the North Island is likely to see the least sadly.

Currently I’m down in Waikato where it is the driest it’s been in decades… however the water table still holds water.  My parents live on well water and can water their garden every night and take showers – and the well refills each day or two. This isn’t the case every summer, even in non-drought years.  This is a reflection of how much rain fell last year here and is still underground.  Other parts of the North Island are the same, but I also know of regions that have zero water tables.

A farmer in South Taranaki contacted me last week after seeing me on Country99TV to point out that his property has zero water now.  What an incredibly stressful situation for a farmer to have to face.

So all over New Zealand, but especially the North Island, rain is needed – and if we get a hit tomorrow and another hit on Monday and another hit 10 to 14 days after that – and a sold hit of rain at that – we may be able to turn a corner on this drought.

But there is a very long way to go…as I type this I see rain on the radars but most places have only had 0-1mm of rain.  Cloudy skies and the smell of rain all feel good – but the proof will be in the rain data on Monday as to who really will get relief from this somewhat patchy band of rain that is set to move in slowly on Sunday and clear NZ by Tuesday.