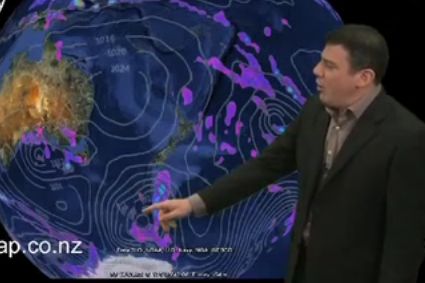 News story and weather video — Who will get the warm and cold weather this weekend and where will the snow fall to low levels?  Our video looks at this, plus we take a look at the weather for the All Blacks game on Saturday night and track tropical storms, hurricanes and typhoons around the Americas and east Asia.

Cold snap:  A cold front will push into the deep south tomorrow but ahead of it will be warm nor’westers for eastern parts of the South Island.  A colder pool of air, straight from the Antarctic, will move in on Sunday bringing snow to low levels – but precipitation levels will be low so don’t expect a great deal of the white stuff.

The North Island will be mild and spring like on Saturday with that colder, showery, change heading through during Sunday.

On Monday most of New Zealand will have colder weather but those winds will ease by the end of Tuesday.

All Blacks:  The current forecast is for cloudy periods and mild westerlies.  Temperature will be around 10 to 13 degrees during the game with only a 20% risk of an isolated shower across Auckland.

International:  We track tropical depression Emily as it hovers over Haiti and potentially will affect Florida in the coming days.  We also monitor other hurricanes and tropical systems in the Atlantic and eastern Pacific.

We also look at the latest typhoon heading towards China.

Not a lot of the white stuff?? So the watch put out for heavy snow to 200m is a waste of time then…

That is in comparison to the snow storm 2 weeks ago.  Certainly snow will be heavy around Southland and parts of Otago and into Fiordland but we don’t expect white out conditions across many low levels across the country.  It’s possible a snow warning may be issued too for the very deep south so keep up to date.

Lets hope those showers keep away for the big test.

Oh and I hear that Christopher Monkton has been in town, heard him on a re run on Leighton Smiths show early this morning.
Wonderful, what a pity NO other media in NZ bothered to have him on, Leighton gave NZ media a well earner serve for not doing so.
I hear he washed the floor in Canberra with an opponent of his, and here the Greenies withdrew for a debate when they found this out, there excuse was that their leader was out of the country.
To hear what Monkton had to say reiterated what the Climate Change/Warming BS is really all about, who started it and why it keeps rolling on. Many names were dropped in it.
For those of you who might like to hear it you may find it on the Newstalk ZB site where you can listen to some of the shows.
Again, what a breath of fresh air, complete with CO2 to boot.
Nough said.

David we are trying to source an interview from Country99TV with him… it is quite entertaining.

Good stuff, looking forward to it.