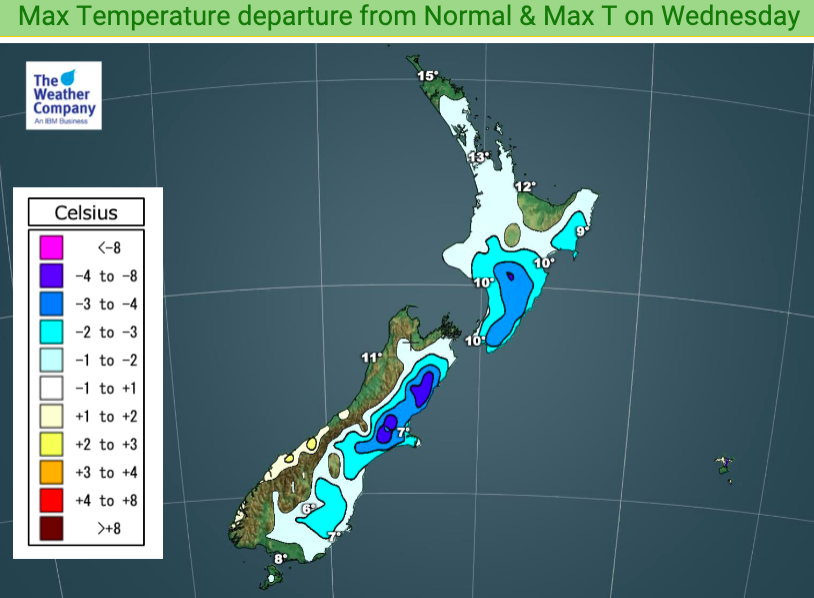 This week a colder southerly flow will dominate the country but you may be surprised to learn that even with this injection of cold, a number of regions will have “normal” temperatures for this time of year during the warmest part of the day (afternoons usually).

It’s a reminder that the weather pattern we’ve had for the past several winters has been leaning, frequently, much warmer than usual. In recent weeks many regions have surged a few to several degrees above normal by day, some even overnight.

The cold change this week resets that and a number of places do go below normal (especially at night) but it’s mostly the eastern side of both islands where daytime highs will be a couple to several degrees below average.

However, on Monday North Island is either normal or above normal, as is much of the South Island except north Canterbury. The West Coast is several degrees above normal in places today.

Tuesday sees cooler weather more widespread – but again parts of the the West Coast leans warmer than usual by day, while the entire upper North Island has average temperatures for this time of year, along with Southland, until night arrives.

Wednesday is the coldest day of the week and many regions will lean a few to several degrees below normal by day. But the West Coast, Nelson, coastal Southland, the Far North and a decent chunk of Bay of Plenty will all have normal temperatures for July during the afternoon, not below normal.

OVERNIGHT:
The southerly will impact overnight temperatures and most regions will be below normal during the hours of darkness. So stay warm this week!

Subtropical winds return by Friday and Saturday for a time – before windy westerlies kick back in again next week (average to warmer than average for many).