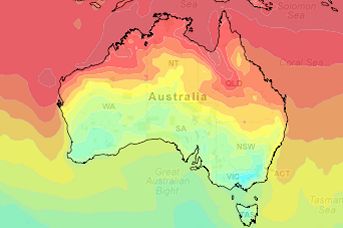 Those in the southern capitals should make the most of the relative warmth over the weekend with a burst of cold winds to sweep through early next week.

Early on Monday morning a cold front is forecast to surge through Adelaide dropping maximum temperatures by up to three degrees below the average on Monday and Tuesday. The cold airmass will be accompanied by blustery southerly winds gusting up to 60km/h, making it feel even colder. Although not as strong, the southerly winds should then persist for much of the working week, keeping maximums below average.

Northerly winds ahead of the front will filter into Melbourne on Sunday, allowing it to warm to around five degrees above average. Melbournians should make the most of this warmth with the change due to push through during Monday afternoon, dropping temperatures by around six degrees. Tuesday looks to be the coldest with a top of 17 expected, two below the norm. Winds are likely to be a feature as well, with gusts of up to 60km/h adding to the wintry feel.

The front will continue its march across the south and reach the nation’s capital on Tuesday morning. Canberra’s coldest days should be on Wednesday and Thursday with tops of just 14, four degrees below average.

By the time the change reaches Sydney on Tuesday afternoon it will have lost some strength, but will still drop the maximums by a few degrees. Strong southerly winds could also be a feature, particularly on Anzac Day and Thursday. Some models are indicating that a low will develop over the Tasman Sea bringing gusts of up 70km/h to the Sydney coast.

Further ahead, most of the southern capitals should remain close to or slightly below average for the remainder of next week.