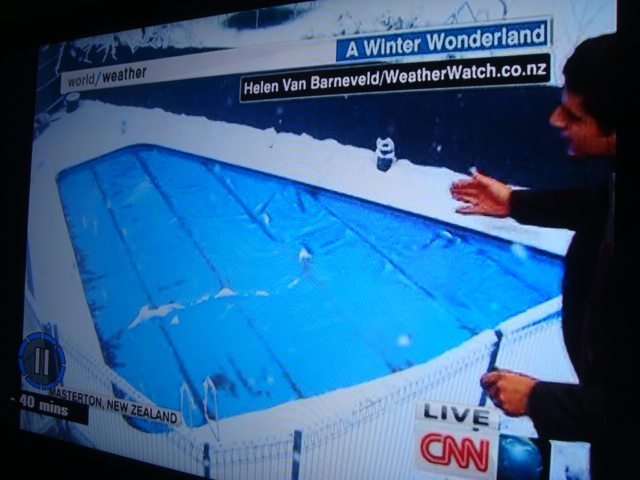 UPDATED 7:33pm — CNN International is this afternoon and evening providing indepth forecasts about New Zealand – using some of the photos and news stories provided by WeatherWatch.co.nz and our readers.

CNN meteorologist Pedram Javaheri told viewers around the world “Our friends from WeatherWatch.co.nz – one of the great meteorological services out there in New Zealand provided this for us [pointing to the photo] – there you can see a wintry scene”.

The photo was sent in by WeatherWatch.co.nz reader Helen Van Barneveld and showed a swimming pool with its covers on, covered in snow.

CNN continues to use WeatherWatch.co.nz readers’ photos into this evening too.  In the 7pm hour they displayed a photo by Jaymie Morgan of Wellington and Michael Warren with a pic of graupel in Auckland.

Mr Javaheri says up to 65cms of snow is expected along the ranges of the Southern Alps tonight and inland Canterbury as more surges of snow come in.

CNN has also been covering Auckland’s historical snowfall today, confirming that it was the first time since 1939 that snow fell in Auckland City.  This was confirmed by NIWA this afternoon too making WeatherWatch.co.nz the only forecaster to predict snow in downtown Auckland.  The weather news authority says a few more isolated snow flakes will be likely tonight down to sea level in Auckland too – but is unlikely to settle.  It’s likely to settle, briefly, above 100 or 200 metres.

WeatherWatch.co.nz head weather analyst Philip Duncan says he has been simply “amazed” at the feedback from readers and viewers today.  “We have been blown away by the huge public response to send in weather updates, photos and videos from all around New Zealand.  We couldn’t provide the service we do without the immense support of everyday weather enthusiasts from all over New Zealand – from Eketahuna to Oxford, Bluff to Kaitaia – it’s been astounding and we thank everyone for contributing to our site and Facebook page”.

Another blustery skiff coming over in Timaru now.  Snow settling thinly.  Will we get more tomorrow??

Hi there – yes more snow is expected overnight and tomorrow across Canterbury – some heavy falls, easing later in the day.