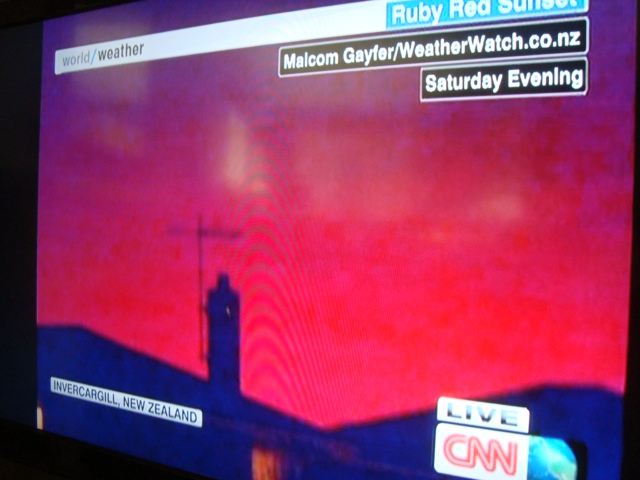 CNN International this morning beamed a WeatherWatch.co.nz photo into homes, hotels and businesses all over the world as ash from an erupting Chilean volcano spreads around the southern hemisphere and over the South Island of New Zealand.

CNN Meteorologist Pedram Javaheri based in Atlanta, Georgia, talked at length about the volcano and why New Zealand is especially vulnerable.

Mr Javaheri pointed to a map of the southern hemisphere indicating where the erupting volcano in Chile is then showed a clear line moving eastwards along the roaring forties towards us.   “The only land mass that interacts with that latitude…is New Zealand” he says, showing how only oceans separate the South Island and Chile from the east or the west.

He kicks off the ash story with the photo sent into WeatherWatch.co.nz by our Invercargill reporter Malcolm Gayfer.  “I wanna show you a fascinating photograph from our friends at WeatherWatch in New Zealand, sharing out of Invercargill…on the south coast” says Mr Javaheri.

The CNN meteorologist goes on to confirm the ash cloud is responsible for the “ruby red” sunset over Southland last night and says that the ash cloud has travelled 9000kms around the globe from Chile.

WeatherWatch.co.nz has a close relationship with CNN and as with any photos or videos sent in to us they are sometimes forwarded on to the international news media when warranted.

Thanks again to Malcolm Gayfer, our reporter in Invercargill, for uploading the photo last night.

And if you notice an extra red sunrise or sunset this week snap a picture of it and share your photo with us by using the upload link at the top of the page.

It certainly was an unusual sky in Invercargill last evening compared to a normal sunset similar to the picture from Timaru.