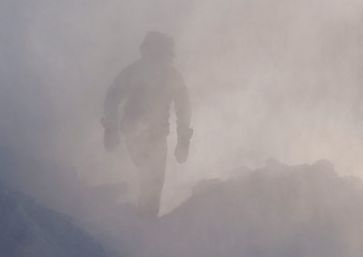 An elite group of scientists is heading to one of the coldest places on Earth to carry out vital research on global warming.

The Arctic Circle that rings the North Pole is known as ground zero for climate change. It also has brutal weather that will batter the team virtually every moment.
They will have to deal with subzero temperatures, severe storms and the threat of polar bears.
“Being able to live within the environment we are studying is an ideal situation for almost any science expedition,” said Kristina Brown, a scientist at the Ice Base station.
Click here to see photos
“[This expedition] requires that our temperate climate-acclimated bodies endure some of the more uncomfortable parts of early spring in the high Arctic.”
The scientists are members of the Catlin Arctic Survey which is operating Ice Base camp off the western coast of Ellef Ringnes Island, Canada for the third year in a row. It is only 675 nautical miles from the geographic North Pole.
Unlike expeditions that use research vessels as a home base, this group is unique in that the scientists will live in tents for almost two months on the very ice cap that is slowly melting beneath them.
“All the research and survey work is looking at how the Arctic Ocean is changing… Overall, the research and data conducted during the ice camp will help us in understanding the local and global impacts of a warmer Arctic, from loss of habitat for iconic polar bears to changes in global climate,” said Ice Base scientist Victoria Hill.
They will collect samples and data in a mission to find out how melting ice is impacting ocean currents, marine life and the climate and weather conditions around the world.
Joining them for part of the journey is a three-person team from CNN, led by Special Correspondent and environmentalist Philippe Cousteau. And they will try to answer your questions.
Keep in touch with the team at Philippe Cousteau and producer Matt Vigil’s Twitter feeds.
For everyone involved, two crucial factors must be dealt with: how to prepare physically and mentally for extreme weather conditions and how to design an effective work flow in spite of the brutal climate.
Brown said: “This is a great opportunity to get out and do some research at a time of year that makes science in this region really difficult. So I am very excited and am looking forward to getting started.
“There’s always a bit of apprehension when beginning a field season in the high Arctic, heading for such an isolated place and living and working on floating sea ice at these temperatures as it is way beyond most people’s everyday experience.”
One skidoo snowmobile, 1,000 eggs, 15 sleeping bags, outerbags and fleece liners and 3,200 liters of cooking and heating fuel are just a fraction of the cargo that must be transported to Ice Base.
There’s also 800 kilograms (1,760 pounds) of scientific equipment in around 50 boxes.
The brunt of this work is spearheaded by Geo Mission, which is organizing the multi-million dollar endeavor.
Chip Cunliffe, head of operations, and Simon Garrod, Ice Base manager are part of the advance party sent to the mission staging area in Resolute, one of Canada’s northernmost communities.
Since late February they have been receiving the gear and make vital decisions such as where to locate Ice Base.
In early March, four scientists arrived in Resolute for rigorous polar ice training, including what do in case of a polar bear encounter and how to sleep safely in a tent in frigid temperatures.
“You can’t do the science if your fingers are cold, losing your fingers and hypothermic. So the biggest challenge for them is just this business of living in the environment really,” says Garrod who has been working in the polar environment for nearly 20 years.
“It’s fairly brutal sleeping in unheated tents at negative 40C (-40F). The biggest challenge or fear is sleeping because your exhaled breath freezes up and forms ice crystals inside the tent and on your face. It’s a bit miserable to start with, but it does get easier,” he said.
The latest satellite imagery of the polar cap is an important tool to ensure the safety of the entire team.
Cunliffe, Garrod and the pilot of their DC-3 transport plane poured over the data for several weeks in order to find a suitable landing spot.
Color shades of the ice on the sea allow them to distinguish between new and old ice. New or reformed ice is best because it is smooth to land on and proves to be more stable. They must also find a balance between a deep water location which is best for research and being closer to land which tends to be safer.
A flyover on March 8 helped them make their final decision on ice presumed to be 1.5 meters deep.
“Most of the pilots have got many seasons of flying experience up here and landing on the ice, and they are able to pick spots even if somebody is not on the ground drilling through to determine how thick the ice is,” said Cunliffe.
The group of 10 people arrived at Ice Base on Saturday, March 12, and will stay there until April 29.
Ice Base scientist Helen Findlay who is making the journey for the second time says it is really a pleasure to get outside, wrapped up and ready for the fresh air.
“I guess that’s why I’m back here. It just takes a minute to glance out the window to realize that we’re somewhere really special.”