Christmas may be on the edge of a high 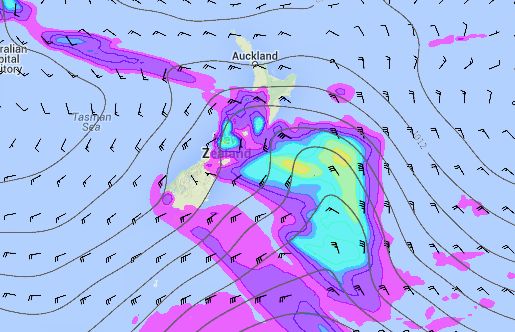 Weather forecasters at WeatherWatch.co.nz continue to closely track the various long range computer models for Christmas Day – and the general feeling is that conditions may be a little unsettled for some – but hot and sunny for others.

“The word ‘unsettled’ doesn’t mean it will be definitely wet – it means there will be a variety of weather conditions around the country so a bit harder to pin down in advance, but, generally speaking we dont expect rain for days nor perfect sun for days either”.

In the 48 hours before Christmas WeatherWatch.co.nz believes a low east of Christchurch could spark a southerly change bringing a mix of rain and showers as it heads north.

Some data even suggests a 50% chance of showers in western parts of northern New Zealand which includes Auckland – although Dec 25th doesn’t look “wet”.

“There’s high demand for a Christmas Day forecast but this year it will be harder to lock in, in advance, due to the changable nature of this spring-like weather pattern” says Mr Duncan.

During media interviews in the past 24 hours Mr Duncan has pointed out that Wellington sees winds swinging from northerly to southerly and vice versa for each week day of this week.  By the weekend a northerly flow will pick up – with gales possible on Saturday in some exposed inland or central areas.

At this early stage Christmas Day should be mostly dry but certainly wind and showers may be part of the forecast too – and the following 24 to 48 hours will be when we can most likely lock this forecast in.

Mr Duncan says the energy makers for Christmas Day (for rain) will be just south east of us and again to the south west. “This set up may place New Zealand in the zone between these two lows for Christmas Day”.

WeatherWatch.co.nz says early data indicates the further north or north east you are, the more settled the weather will be thanks to a large ridge of high pressure which may only be brushing NZ on Christmas Day.

Another set of data over the past few days suggests that Wellington and central NZ may also be windy – but again it all comes down to the timing of these systems – something long range weather forecasts still sometimes struggle with. More details in the days to come.

– Image / Dec 24 (Christmas Eve) shows a low just east of Chch and a sou’west change spreading over NZ. While the map looks a bit wet and windy the suggestion is that the following day may be more settled – it’s now all about timing of the dry weather – as we know the weather pattern looks unsettled in the days prior to Chrismas 2013.

It looks like the models are beginning to line up now so I think your summation above looks pretty good. Actually it looks very springlike rather than summer like.