Christmas Day National Forecast – It’s not looking like summer for some! (+6 Maps) 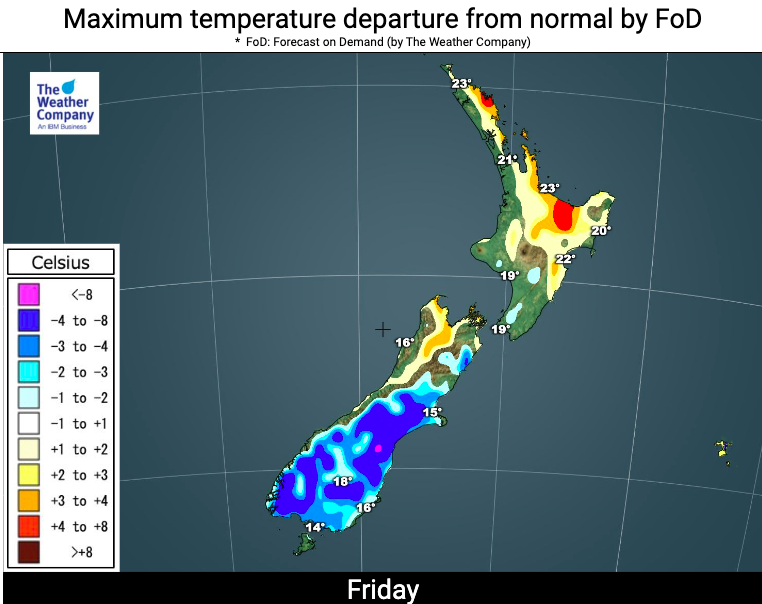 Some parts of Southland and Otago may get hail and an isolated thunderstorm too.

A dusting of snow on the mountains is expected later in the day or overnight into Boxing Day.

The North Island is mainly dry but might be fairly cloudy at times in the west.

Here are the regional forecasts for Friday/Christmas Day…and as always, refer to your local HOURLY forecasts for the best details in your area.

Northland, Auckland, Waikato & Bay Of Plenty
Morning mid level cloud in the west then breaking but expect high cloud for the rest of the day, some sun may break through at times. The Bay Of Plenty may have a mostly sunny morning then high cloud increases. Southwesterly winds, breezy about some western coastal areas.
Highs: 21-26

Western North Island (including Central North Island)
There may be some morning cloud then mostly sunny but expect some high cloud to push in from the west, westerly winds for most, tending southwest about Taranaki.
Highs: 18-20

Wellington
A bit cloudy but some sun may break through now and then, also the chance of a brief shower or two. Winds are light, tending to the north later on.
High: 18-19

Canterbury
Showers, more so near the coast, starting to thin out in the afternoon and becoming drier with southerlies tending northeast, some sun may even break through. In the evening showers start to pick up again, once again nearer the coast where there is the low risk of an isolated heavy fall or thunderstorm with hail. Southwesterlies develop overnight.
Highs: 15-19

West Coast
Cloudy areas (sun may be more frequent in the morning), risk of a shower or too, more so from afternoon as southwesterlies tend a little more to the west.
Highs: 15-20

Have a wonderful day! 🙂