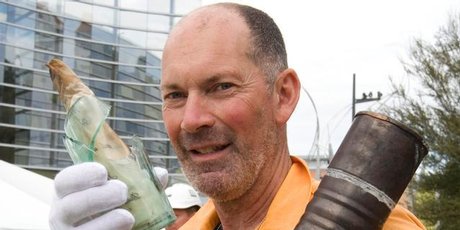 The contents of hidden time capsules discovered under ruins in the wake of the Christchurch earthquake will be revealed to the public next week.

Two of the capsules were discovered underneath the Godley Statue in Cathedral Square as rescuers sifted through the rubble left by the February 22 quake.

One was a glass bottle containing a vellum manuscript and the other was a larger sealed copper tube.

Another sealed tin box was unearthed beneath the old Civil Building on Manchester St.

All the capsules’ contents will be revealed in a ceremony at the Canterbury Museum on Tuesday, a statement issued this afternoon revealed.

Christchurch Mayor Bob Parker will open the two sealed containers, while the vellum manuscript from the glass capsule has been unrolled and dried out and will be on show for the public and media.

Crane driver Barry Riley discovered the capsules under the Godley Statue on March 1.

He had climbed up the 3m-high concrete plinth to see whether the toppled statue could be put back.

But when he looked at the base of where the statue had been, he found a shallow hole that contained the message in a bottle and the time capsule.

They were taken to Mayor Bob Parker, who passed the artifacts on to Canterbury Museum.

On the folded piece of parchment the words “was erected in” and “by” can be seen written in delicate copperplate lettering.

“In my opinion, I think it was engraved with something like: ‘This statue was erected in a year … by the grateful servants of Christchurch in recognition of John Robert Godley’s incredible work as the founder of Christchurch and Canterbury’,” Mr Wright said.

He said the find had slightly lifted the morale of Cantabrians who were in dire need of some good news.

“For Christchurch, it’s been a piece of really interesting and bright news among all the not so happy stuff.”

Mr Wright said he would like the artifacts to be buried again with a new 2011 capsule for a future generation to discover.

It is thought the capsule was placed under the Godley Statue when it was erected in 1867.

John Robert Godley, from Ireland, is known as the “Founder of Canterbury”.

He lived in the province for only 2 years.