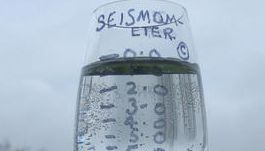 While some left the Canterbury region to escape the aftershocks and others stayed home worrying about the next one… one man saw the lighter side of life in dealing with the hundreds of earthquakes that followed the big 7.1 quake on September 4th.

David Shone, a regular visitor at WeatherWatch.co.nz, sent in numerous photos of the quake’s aftermath and what life was like in the streets around his New Brighton home over the past two weeks.

He also invented a fun way to measure the aftershocks – it’s a work in progress but unfortunately for him (but fortunately for everyone else) the quakes are now starting to ease – so time is running out for him to modify it further.

This was the first seismometer.  But after some spillage he stepped it up a notch.