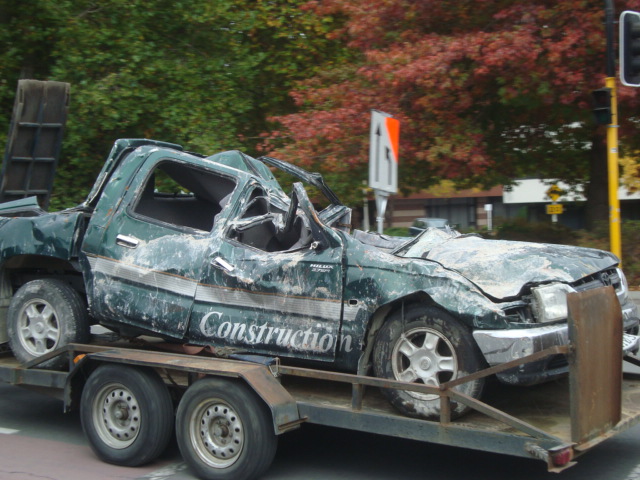 Hotel Grand Chancellor (right), broken at the top (basically just above the leaves of the tree forefront).  It’s now an ominous looking building.

This building was two stories.

Reinforced concrete was twisted and torn in the quake.

Another building being removed.

What came crashing down from the heavens.

A demolition crane is parked on the street in front.

Exposed – the outer wall of this small room three floors up reveals the force of the quake.

From the top of the church a statue of Mary remains, looking through broken windows over the broken city.

Carpet pulled up from a building flooded by liquefaction.

Liquefaction pushes the ground up in this carpark about 30cms.

Liquefaction not only buckles the tarseal but it also pushes up sand.  On this footpath it has been removed by the council but see the height of it inside the fence.  Keep in mind the footpath is about 15 or 20cms above the road already.

Everywhere you look the ground has moved.

These are the units, badly hit by liquefaction.

Commuter chaos – everywhere you look roads are cut off, closed, or partially closed.

Here the road has slumped into the river running alongside it.

Water still remains in the this underground carpark.  Note the mud on the wheelie-bins inside, caused by the flooding from liquefaction.

A peaceful street in Autumn…lined with a few Autumn leaves but also portaloos.

A beautiful Autumn evening in Merivale.

Thanks for the pics Phill. I lived in Christchurch a few years ago and was appreciate the time you took to get these for us.

Living in Auckland it’s hard to grasp the severity of what has happened to the garden city, these pics help.

It would be too easy to think that it was over and done with living away from the area. The photos tell a different story, they show that help for Canterbury people is still needed and that it is going to be a long road to recovery.

Thanks for the reminder.

Hi Eileen – that was really the motivation behind it – I also know of people who are too traumatised to go back in to the CBD but feel OK with looking at photos.  I understand there will be some who find this a bit much though.

Appreciate your comments – and glad you listen to my interviews with Danny on NewstalkZB!

Thank you for sharing the photos. I was listening to Danny when the Earthquake developments were coming through. We are based in Wgtn and have been looking after a tourist from San Fran who was caught in the earthquake in Chch. She has suffered some brain damage so won’t be able to fly home for months. Thank you for sharing the images which show the reality of the situation. She was dragged out and went back to her temp accommodation to find all her valuables were gone. Not the best experience in NZ however she still loves NZ.