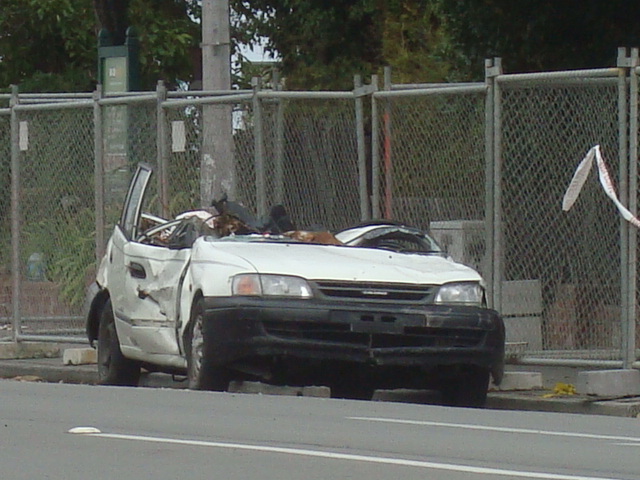 This past weekend head weather analyst Philip Duncan again visited Christchurch, to take photos of what the red zone looks like and how life has changed in the garden city.

The words “dead silence” have never rung so true as when I stood on the perimeter fence of the red zone – the part of Christchurch still closed off to the public.  Like some movie set the streets lay empty but for the most part tidy.  Debris had been swept into piles but the streets were dusty and full of Autumn leaves.  An unsual sight for the centre of a big city.

Christchurch, known as the Garden City, still looks beautiful.   Ducks and seagulls peacefully walk inside the cordon, unaware of the fact that few humans can do the same.

Restaurant tables remain outside with sun umbrellas still up…frozen in time at 12:51pm on February 22nd, 2011.

After living through the first earthquake last September I have returned to Christchurch every month.  My last visit was in the last weekend of January.  I sat in places for lunch that are now in ruins.  I have to say, even though my last visit was a full three weeks before the deadly aftershock you do have a sense of “that was close”…or “What if I had chosen to fly down on that day instead”.  I was weeks out – I can’t imagine the stories that must be told of those who had just left these places a few seconds before the quake hit.

We cycled and jogged around the entire outside of the red zone under a very gloomy sky.  The first thing that hit me was the silence.  No cars. No voices.  Not even the sound of birds.  Eventually a noise could be heard – the distant sound of a digger tearing down a building a block over.

I noticed flowers blooming within the red zone… I don’t know why I noticed it…I think because it was surreal to see something beautiful in contrast with piles of debris…and the knowledge of the dozens of lives lost within.

Surreal is a word that accurately sums up the scene.  Spooky is another.  The tallest building in Christchurch, the Hotel Grand Chancellor, stands tall with it’s unusually big roof.  In some ways it now reminds me of the house Norman Bates lived in, in the movie Psycho.  It towers over the city, snapped at the top and slumping.  A few windows popped out from the movement.  This large building almost seems like the dagger in the heart of this once lively and beautiful CBD.  It slumps over…wounded and dying.

I point out a one storey building which has a collapsed roof.  My Christchurch friends tell me it was once two stories.  I note what looks like a large empty car park – my Christchurch friends tell me that used to be an entire block of two and three storey buildings.  It is simply surreal and as an outsider, can be quite hard to get your head around what has really changed here.

Some streets have a terrible odour as pools of dirty stagnant water lie there.

In stark contrast the suburbs are alive and active.  Small shopping malls are now packed.  Empty car parks are hard to find.  When you do find one and then enter a building you can’t help but look around you.  “Will that wall fall over in an earthquake?”  “Where could I run to if a quake hit”.  The most disturbing thought is imagining the roof falling on to you in an aftershock.  I had this thought numerous times but most noticeably while out for dinner on the Friday night.  I can’t help but imagine the horror of a roof collapsing with a room full of people inside.  In an instant you find yourself blinking and coming back into reality and carrying on enjoying your meal.  But that thought is with you always.

I can’t think of an accurate way of describing what Christchurch is like now.  The people are the same.  The suburbs, for the most part, look the same.  The CBD looks the same from a distance.  But up close….you realise that the beating heart of Christchurch has stopped.  It’s like one large suburb now without a business and tourist centre to it.  The city centre is dead…a ghost town.  But the life is now around it – and it is flourishing.

The new Christchurch will be spectacular – and unlike a human heart the heart of this city can be revived many months down the track.

But for now…it lies there broken, wounded, alone and silent.

See photos from Philip Duncan’s tour around the Red Zone.

Hello Phillip,
Have just heard you on the radio and decided to have a look at your site and seen some of your photos. The first thing that came to mind was my wife, as she recently had dropped one of our children into town and came back very upset at what she saw for herself. took some time to calm her down, as she said it looked like a bomb site and didn’t look like home anymore. On what I saw last night going down St Asaph St to one of our local pigeon Clubs for a race,she’s correct,it’s still a bleep bleep mess still in parts. Its not like home at all, crikey what a story for our children to recount when they have their own family one day.

The September shake was a rock an roll affair and lasted longer, but left no mess inside, reminded us how unprepared we were. Couldn’t find a torch with batteries or a radio, that was abueaty, thankfully the kids had their cellphones which gave us light and a radio to listen to and poor old puss legged it quick and was gone for nearly a week, gutless mut.

This time (Feb shake ) was upstairs having a rest after lunch, recovering from a recent stroke, with puss on the end of the bed. Crikey could get used to this, but only doing what hospital staff told me to do when back home. Able to hang onto him this time. By the time i got downstairs without falling this time tripping over the the gutless mut coming down with me,and saw the bleep bleep mess through the place. I couldn’t believe what I saw, it was a complete bombsite. After trying to tip toe through the place with my walking stick, I thought bugger this I’ll wait for my lovelywife to get home first as she will want to take photos of the mess for the insurance people.

So decided to go out side an see whats what,people everywhere, silt and water pouring down the drive from across the road and down the street in a torrent into the big hole that had opened up in the road where a car had nearly dissappeared into, with the backend sticking out of it.

Started talking to strangers while leaning on the fence watching all of this unfolding when another big shake happened, I turned around and saw part of our drive expanding upwards like a bubble, then collapsed, a moment later another larger one further into the drive started expanding upwards and broke open with all the water and silt powering out of it. This scowed out a rather decent hole under our garage block wall which had been filled with steel and concrete when built and left a Bleep bleep mess everywhere, hell one thought one was in the movies, but no this was for real. by now there were people and cars everywhere. Our street is normally a busy street, but at this moment it was like being in the Square. Going over in ones mind what happened to Christchurch over recent times, it is just hard to believe this has happened. I have lived here all my life and wouldn’t move either, but to have all this happen over recent months beggers belief.The only thing we can take out of this is there is always someone worse off than us, and sure enough just look to Japan. Remind me again how clean necular power is again, I dont think so, thanks.

Been good talking to ya. catch you later.

Hundreds of thousands of words have been written and spoken by professional commentators about the Chch quakes but no report I have read or heard comes close to this blog in its skilful and very elegantly composed evocation in words and pictures of what post-quake Christchurch actually feels like. Congratulations Phillip.