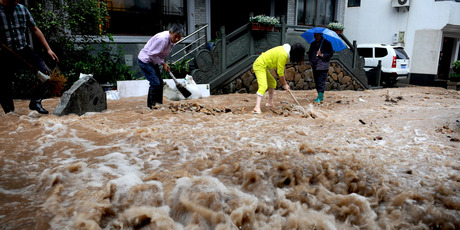 Typhoon Fitow, which is barrelling into China’s east coast packing winds of more than 200km/h, has killed at least five people and impacted three million.

One of the victims in Wenzhou, 55-year-old Ni Wenlin, died “when a strong wind blew him off a hill” late on Sunday, Xinhua said, while the other, Chen Wanjie, was killed after being buried beneath his duck breeding factory.

Parts of Zhejiang, which neighbours the commercial hub Shanghai, saw nearly 29 centimetres of rain over 17 hours from Sunday to Monday, the official China News Service said.

Areas in Fujian to the south saw up to 16 centimetres, according to the service.

In the hard-hit Cangnan County in Wenzhou, more than 1200 homes collapsed.

In Fujian, the typhoon snapped electricity poles in half, leaving power lines on the ground, and bent iron roadsigns, CNR reported.

A village leader in the coastal city of Ningde told the Beijing Times that huge waves had damaged a 200-hectare seaweed farm, which nearly 100 families depended on for their livelihood.

The storm is expected to move northwest but “weaken quickly”, Xinhua said on Monday, citing the National Meteorological Centre (NMC).

Authorities evacuated hundreds of thousands of people on Sunday as Fitow approached the mainland.

The NMC issued a red alert, the highest, for the storm as it moved towards the coast.

The storm forced the suspension of bullet train services in several cities in Zhejiang,
Fujian and Jiangxi provinces, and saw 27 flights cancelled in Wenzhou, Xinhua said.

It is unusual for a typhoon to come ashore in China’s southeast during October, at the end of the storm season, the report quoted the weather centre as saying.

Named after a flower from Micronesia, Fitow has hit just two weeks after Typhoon Usagi wreaked havoc in the region, leaving at least 25 reported dead in southern China.

Taiwan’s Central Weather Bureau had issued a warning over the storm on Sunday morning as it surged past the north of the island.