Chch flood mitigation could be years away 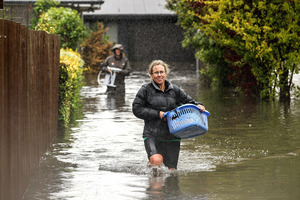 It could still take two years to fully implement a flood mitigation plan for Christchurch’s flood-prone areas following more damage from this week’s major storm that crashed into Canterbury, the Government and the local council say.

Ms Dalziel wanted the measures to be completed within two years, it emerged today.

“Addressing increased flooding risk continues to be a priority issue for the council and a lot of work has been done over the past 18 months since the aftershocks eased,” she said.

“But Christchurch people have been through yet another extreme event in the past two days and it has been a real wake-up call for all of us.”

Mr Brownlee also believed that two years was as quick as could realistically be expected.

He supported the move to fast-track work on mitigation options.

“So programmes are being looked to which would remediate, or mitigate the effects of those 100-year events.”

The Insurance Council of New Zealand said the Flockton area had flooded on several occasions since the earthquakes lowered land in the area.

“So, this is good news for hard-pressed residents constantly worried about what the next heavy rain will bring,” chief executive Tim Grafton said.

Fifty houses in Flockton Street were flooded in the latest storm.

Electricity company Orion said it hoped fewer than 100 people would remain without electricity overnight. At the peak of the storm, 7000 customers were without power.

Chief executive Rob Jamieson said the multiple impact nature of the storm, which had meant dealing with issues such as gale-force winds, flooding, slips and road closures, had presented challenges for line crews.

Health authorities are warning residents to take extra care during the flood cleanup.

“Flood waters may have been contaminated with sewage and the most important thing to remember when cleaning up is to practice basic hand hygiene.

“Always wash your hands with soap and water after being in contact with contaminated water, and after cleaning up areas affected by flooding.”

It was also important not to allow children to play in flood-affected areas until the clean-up was complete, he said.

Local heroes the Student Volunteer Army were back in action today, shovelling mud from the torrential flooding.

Residents in Shirley move their belongings out of their flooded homes in Christchurch, New Zealand. Photo / Martin Hunter

Residents in Shirley move their belongings out of their flooded homes in Christchurch, New Zealand. Photo / Martin Hunter

President Bridget Williams said Heathcote Valley School called on them to help clear the streets and paths around the school in the Heathcote Valley so children could get to and from school.

“Hang in there, won’t you,” he told the shop owners and staff working to mop up after the torrential rain which poured over sandbags and flooded their shops.

Mr Key said he appreciated it must be frustrating for people to continuously deal with natural disasters beyond their control.

“[But] I still believe, fundamentally, there is an enormous level of optimism in Christchurch.”

* get rid of food that may have been in contact with contaminated water;

* take care with what you do when handling water-damaged household effects, furniture, flooring materials etc as they will have been in contact with potentially contaminated water;

* contact your insurer first – they will tell you if you need to take photos. Seek advice on whether drying out is going to be a safe solution, or replacement is necessary;

* use the kerbside wheelie bin collection service that you already have at your house to dispose or recycle household waste; and

* EcoDrop and Transfer stations are open for disposal of large quantities of waste or items that are not collected through the kerbside collection service.