Chaos as big blow moves in 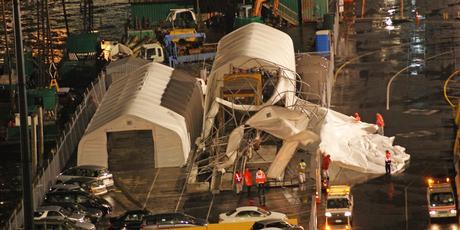 Thousands of households as far north as Dome Valley near Warkworth and as far south as Huntly were without power.

Large trees crashed on to the Waikato Expressway 50km south of Auckland, striking one vehicle and creating traffic chaos.

Diversions were set up for at least half an hour as police used chainsaws to remove the toppled trees.

An overhead sign fell on to the Northwestern Motorway between Newton Rd and St Lukes, closing the west-bound lanes.

Grey Lynn resident Debbie Pope had her car partly crushed by a huge pine tree which fell in Shirley Ave.

“I thought it was thunder at first, but when I looked out the window there was a tree, larger than my house, covering my car,” she said.

The tree crashed between two houses, missing by 3m the bedroom where she had been. “So I was pretty lucky in the end; it probably would have crushed me.”

A Vector spokeswoman said extra crews had been brought in last night, but it was not known how long it would take to restore power.

Police were called out to at least 18 incidents of fallen trees blocking roads in the region. An ambulance spokeswoman said a car had hit a tree in Tuakau, resulting in one person being taken to Middlemore Hospital with moderate injuries.

Thames and parts of the Coromandel were also affected by the storm, which had battered the lower North Island on Friday morning.

Weatherwatch analyst Phillip Duncan said the storm, from the Southern Ocean, was one of the largest in the world yesterday afternoon in terms of size and air pressure.

“We were only touched by the top of the storm,” he said.

“The centre of it was 2500km below Auckland, yet we were getting battered, with huge downpours. That gives you an idea of the strength of it,” Mr Duncan said.

Gale-force winds were expected to continue during the weekend in Auckland. After the thunderstorms eased, showers would remain.

Regional parks manager Scott De Silva recommended staying away from the beach at high tide – at 5.53am and 6.25pm today – and for rock fishers to wear lifejackets and take extreme care at all times.

He said access to Flat Rock and Muriwai Beach could be closed.

The MetService forecast a 6m swell off the North Island’s west coast.

Earlier on, lightning caused fires and cut power to thousands of residents in the lower North Island.

Power had been restored to the last houses about 5.20pm, but the severe storm warning meant more downed power lines were possible.

He advised people to “always assume that lines are live” and call the lines company.

Thunderstorms and snow were also expected to continue in the South Island, with particularly heavy snowfalls south of Mt Cook.

A heavy-rain warning remained in effect for Fiordland, the Westland ranges south of Otira, and the headwaters of Canterbury and Otago rivers.