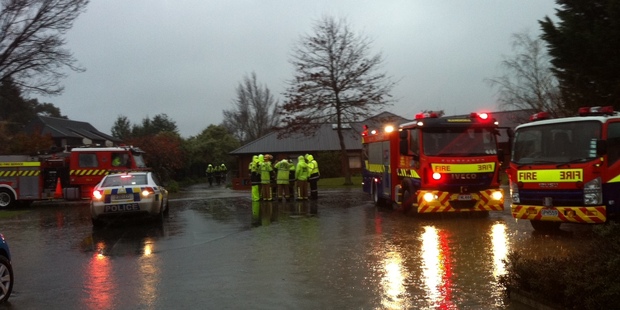 Residents in north Canterbury have woken up to flooding in the region, after heavy rain fell across the country overnight.

More than 100mm of rain fell in some areas of high ground, MetService said, with around 60-70mm in north Canterbury in last 24 hours, causing flooding in some places.

Rangiora appears to have been worst hit, with the Fire Service dealing with a number of call-outs to the region overnight.

More than 20 residents of Bainlea House rest home in Rangiora were evacuated early this morning because of flooding throughout the building. The elderly residents were taken to nearby Rangiora Baptist Church.

“No one has been injured from this incident, however we are generally assessing residents as they are evacuated,” Ian Henderson, St John South Island communications advisor, said.

“The flooding was caused by a nearby stream which has breached its banks.”

There was “no danger to the residents”, police said.

It has caused flooding throughout the region, with police advising caution on roads, particularly Tram Rd and State Highway 1 near the Ashley River.

“There are several low areas of the road where the water has pooled. Motorists are duly warned to slow down and take care,” police said.

“The local authorities and Transit have road crews out erecting signage and trying to alleviate the problem.”

Auckland has seen around 70-80mm of rainfall in 24 hours, and there are reports of surface flooding on roads, with motorists warned to take extra care while driving.

However, heavy rain is expected to continue in the city this morning, with warnings that the “worst weather is yet to come”.

“This morning rivers and streams are rising and surface flooding is common around Auckland,” Civil Defence said.

“This evening a storm is forecast to track across Northland and Auckland bringing very strong wind and more heavy rain.”

Last night, there were rock falls on State Highway 1 at Kaikoura.

Rain warnings are expected to continue throughout today and be extended to the eastern region, the Government forecast said, as a band of rain remains over the country.

And the rain will make setting up for National Fieldays at Hamilton’s Mystery Creek Events Centre a “rather soggy affair”, the statement said, but the weather looked set to slowly improve through the week with some sunnier spells returning for the final few days. The event starts tomorrow and finishes on Saturday.

The Transport Authority said scheduled night works on the Poike Rd roundabout on State Highway 29 in the Bay of Plenty had been postponed until the weather clears.

Dylan Thomsen of the AA said drivers should increase the usual two-second following gap to four seconds and keep lights on.

The weather is likely to clear for the weekend, however.

Between 100mm and 150mm of rain expected to fall from overnight until tomorrow. Severe winds could hit today. Temperatures to reach a high of 17C and a low of 10C for the next three days.

Up to 150mm of rain was predicted to hit the region in the 36 hours to 8pm today. Temperatures to reach a high of 18C and a low of 8C in Whangarei over the next three days.

Up to 200mm of rain was predicted to fall from noon yesterday until midday today. Temperatures to reach a high of 17C and low of 7C in Whitianga over the next three days and 17C and 10C in Tauranga.