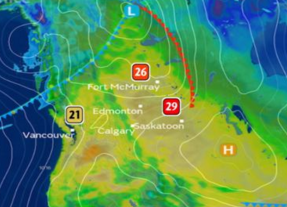 There’s a massive task for firefighters in Canada, where a catastrophic blaze has almost doubled in size.

Now the best they can hope for is rain, to help contain the flames.

CNN’s Dan Simon said temperatures are expected to drop tomorrow and there is a slight chance of rain.

“[Rain] could certainly help things but the wind continues to be a problem. Not ideal conditions for firefighters and we just don’t know when any of this is going to subside.”

High temperatures are hindering efforts to deal the fire.

Almost 90,000 people have had to abandon the oil town of Fort McMurray.

Sky’s Amanda Walker said smoke can be seen in almost every direction.

Planes are dumping water on the flames though Ms Walker said it’s a near impossible task because of the scale of the fire.

How terrible this fire is, the poor people must be terrified and heartbroken. May they be given strength and courage, and lots of support

A terrible fire, my thoughts go out to the thousands of people whom have lost everything in the fire.

Hope they get lots of assistance after the fire is extenguished.