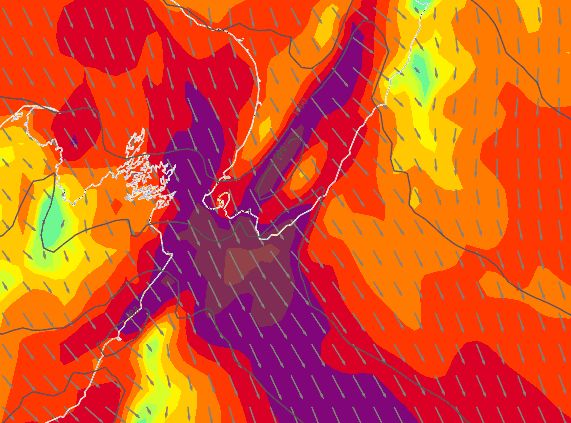 WeatherWatch.co.nz maintains the forecast we issued last week, that gale force winds would likely ramp up to severe gale (or hurricane force – with sustained winds over 120km/h) at times around exposed parts of central New Zealand on Monday.

Winds of this speed can cut power, bring down trees, lift roofs and making driving difficult.

Latest data stil confirms a fairly short lived blast of severe wind will push through central areas on Monday – with the winds building today through the Southern Alps and then stepping up significantly through the lower North Island on Monday afternoon.

However gales move in today for some southern areas.  Through inland parts of Canterbury farmers are now advised that these same potentially damaging winds are expected to develop for those near the ranges overnight tonight.  Damaging gusts of 150km/h are possible.

Generally speaking Inland gusts of 100 to 150km/h are expected overnight though inland and northern Canterbury, then around the lower North Island – including exposed parts of Wellington and inland parts of Wairarapa. Coastal Marlborough will also be exposed.

Motorists driving between Hutt Valley and Masterton on Monday – including the Rimutaka Ranges – are advised to take extreme care with gusts potentially strong enough to blow some vehicles off the road for a time.  Gusts are expected to be around 130 to 150km/h across the lower North Island.

Flights in and out of Wellington airport may also be cancelled or delayed, especially during Monday PM.

There may also be delays to ferry services.

Overnight Monday and into the very early hours of Tuesday the burst of strong to gale wind surges over the rest of the North Island – weakening as it does so for most areas.  Damaging gusts are less likely north of Taupo but gales may still affect exposed places for a time.

The window for potentially damaging winds is around 6 to 12 hours for the regions listed above.

By Tuesday afternoon most places will have much calmer conditions.

“This blast of wind over the next 48 hours may well be the peak of the October winds” says head weather analyst Philip Duncan.

“Long range wind maps show a few more gales in the forecast in the days ahead but probably not to the same level as this front and belt of wind”.

Mr Duncan says the long range maps even hint at a potentially settled Labour Weekend.  “Still too early to lock in for sure but certainly some long range models are forecasting a large high around New Zealand then…it will certainly be well overdue!”.

Cringe, we are in the direct firing line for the NW, it blasts straight into here … and there’s not much of us. Hoping it is not a low level system that turns to low (S) pressure to lift over the ranges as it does at times here. NW air damming is shite too but not as bad as the rotation from an NW strengthening itself. Sorry Wairarapa, but it needs a clean blast over to you.