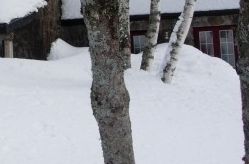 Are you a Kiwi living in Britain?  Send us your photos of the cold snap – click here to upload

Britain is in the grip of a cold snap that has blanketed much of the island in snow and brought record low temperatures to parts of it.

Drivers are being warned to take extra care as the big freeze tightens its grip, with heavy snow and ice predicted to continue for the week in the UK’s earliest widespread snowfall since 1993.

Parts of eastern England and Scotland already blanketed by thick snow could get up to 25cm more by Monday morning local time (this evening NZT), reports the BBC.

Over the weekend, the mercury at Llysdinam near Llandrindod Wells in Wales plunged to minus 17.3C – the principality’s lowest ever temperature for November and the UK’s chilliest for the month since 1985 – reported The Independent.

High winds are expected to enter the mix on Monday local time. BBC weather forecaster Liam Dutton said: “It will be really quite strong, so significant wind chill will be an issue. Even where there isn’t new snow, what’s there already will be blown about and roads that have been cleared could be covered up again.”

The AA experienced record call-outs over the weekend and is warning motorists to take extra care and urging those in the worst-hit areas to avoid driving at all if possible.

And still the proponents of Global Warming, oops sorry, Climate Change, tell us we are in dire straits, follow the monet trail people, it’s all about the destruction of the middle class, the world is broke so something else has to be taxed, lets see, oh yes CO2 will do for now, Oxygen will be next when the people are just about on their knees. Open your eyes and minds all, all is not as it appears.