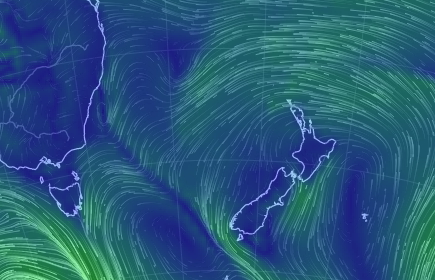 After a largely settled week, Friday is showing some signs of activity – though most places are still in for a good day after the big one!

A northwesterly airflow looks to be building over the South Island in the morning, while a ridge hangs over the North Island for much of the day.

It’s shaping up to stay mostly sunny in the east of the South Island, with some high cloud about the lower half of the island, pushing a little further north later in the day.
Temperatures will warm up about inland areas in the east, especially Canterbury, getting into the high 20s, with some places perhaps even approaching 30.
Northwesterly winds around inland parts will build a little in the afternoon, while east to northeast winds near the coast for much of the day will keep temps down.
Later in the evening, northwesterlies should finally push through to the coast, bringing a mild end to the day.

Over the other side, the West Coast will see periods of cloud, and the odd sunny spell with north to northwesterly winds.

There appears to be the low risk of an isolated shower late afternoon / evening about inland eastern regions then pushing offshore in the evening – though our forecast team is careful to stress – we don’t feel it’s particularly likely.

Easterly winds will blow across Northland and Auckland, leading to sunny spells and periods of cloud.

Northeasterlies will stick around in the Bay Of Plenty, leading to similar conditions.

And more of the same over the other side, as it should stay mostly sunny along the East Coast, with east to northeast winds.

Sunny areas and some cloud are the order of the day from Taranaki down through to Wellington, along with winds from the west mostly, with Wellington seeing north to northwesterly winds.
There may be an isolated shower in the late afernoon and into the evening inland about some ranges once again, but the risk appears to be low.