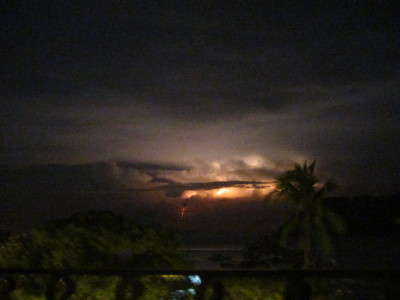 Written by weather analyst Richard Green…On Labour Day I began this blog about our recent travels around the world during a three month holiday.

We started in LA and then flew to the Cayman Islands in the Carribbean via Miami. The flight was a smooth one despite us being on an ‘old’ American Airlines aircraft.

We arrived in Grand Cayman about 7.30 in the evening and it was almost dark. Flying in, the clouds were mainly cumulus however one or two thunderheads were also noticeable which developed further later that night.

When we landed a squally shower greeted us at Owen Roberts International airport but the humidity was certainly high. Despite the rain and wind, it was still 29 degrees. This was to be one of the few showers during our month long stay.

Most days were sunny and a little breezy with temperatures climbing into the low to mid thirties. The humidity made it feel hotter and even the locals would complain about the intense heat at times.  July is midsummer in Cayman but even their so called winter sees the mercury at about 26 degrees during the day, ropping to 20 overnight.

The beaches were pristine and it was the low season so tourist numbers were at a minimum.  The heat slowed down everybody and some businesses closed in the middle of the day when the temperature was extreme.The ” feels like ” temp was often about 42 or 43 degrees.

One day the power was cut to the island and this made it very uncomfortable without airconditioning so it was a great relief when it came on 7 hours later!

I tended to walk the beaches at about 7am or 7pm when it was a little cooler and the breeze was just a gentle zephyr.

The group of islands are incredible and certainly idyllic.

During the third week we decided to head south to Panama and although the climate was similar we witnessed one intense thunderstorm with thunder that was severe enough to wobble windows and remind me of the Canterbury aftershocks!

This part of the Central America is slowly climbing out of the third world and has much to offer. The Panama Canal is quite remarkable and worth a visit to experience first hand. Humidity was lower first thing in the morning compared to Cayman but by midday it was on a par and cool drinks were certainly in order.

Next time we’ll take a look at the Big Apple which can certainly turn it on whatever the time of the day or night.