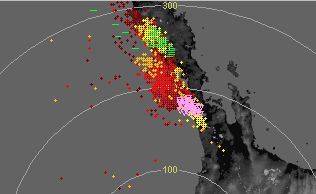 UPDATED 3:45pm — Over 2000 lightning strikes were recorded this hour, almost entirely over Northland as the most active band of thunderstorms in about four years crossed the region, says WeatherWatch.co.nz.

The total number of strikes detected by the free and live Lightning Tracker at WeatherWatch.co.nz has reached over 15,000.

The impressive front inched towards the west coast of Auckland and Northland but only grazed northern parts of Auckland.

Rumbles of thunder were heard across some parts of the city but for the most part, as earlier predicted, it was mainly to the north of urban areas.

A WeatherWatch.co.nz reader, going by the online name of “Whangarei Resident” told us a short time ago “WOW – that thunderclap shook the house. I counted 6 secs from flash to crash. Its a beauty!”.

“Laura” from Northland wrote “Near Kaikohe there’s incredibly loud thunder and lightning flashes. The wind has just got up and it is torrential rain. Really exciting!”.

“It’s just arriving in Whangarei. Loud clap of thunder a couple of minutes ago and now the heavens have opened. Haven’t had a good thunderstorm in ages!” wrote Alison.

This photo was taken on the Kaipara Harbour/Pouto Peninsula area at 1.21pm as the first thunderstorm started to roll in. Uploaded by: Rachel Kuljish

“This is one of the most active thunder bands we’ve seen in some time” says head weather analyst Philip Duncan.  “These thunderstorms may produce localised flash flooding and produce damaging tornados”.

Mr Duncan says any tornado would be small scale, such as EF0 or EF1 – similar to other damaging tornados across the North Island this year.

The band of torrential rain and thunderstorms is now mostly clearing Northland and should be gone by 5pm.

This would be a great time to have a “haka”……very impressive.  And OK, I’m from Texas, and you’ll just put our little thunderclappers to shame.  Would have loved to have seen this.

I take it we are going to miss the fireworks again.

Can’t remember the last time we had a decent show of lightning.

Are you scaring it away Phill?

We could hear the thunder in the distance from about noon at Waimamaku, South Hokianga and it finally hit us about 1.30pm. Lasted about an hour and took the power out over a large area. Some hail mixed in with the rain. Sounds like more on the way as well.

WOW – that thunderclap shook the house.  I counted 6 secs from flash to crash.

Near Kaikohe there’s incredibly loud thunder and lightning flashes. The wind has just got up and it is torrential rain. Really exciting!

.  Loud clap of thunder a couple of minutes ago and now the heavens have opened.  Haven’t had a good thunderstorm in ages!

Thunder is now above us  here at Dargaville/Pouto area. Thunder very loud and the rain has started.

Looks like it could be just scraping over Wiri in South Auckland looking at the lightning tracker, and the wind has picked up around here in the past 45 minutes, but it certainly has darkened up out west looking out over Auckland Airport. Hoping for a good lightning show though, haven’t seen a good one close up since I was in Pennsylvania in 2009!