Aviation: 5 cool planes you might find yourself traveling on soon (+VIDEO) 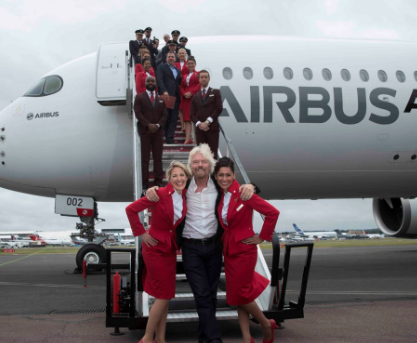 It’s kind of like Fashion Week for aviation geeks.

This week’s Farnborough International Airshow outside London is so big it takes two years to put the whole thing together.

And just like Fashion Week in New York, people gather from around the world to spend a fortune on the most sophisticated designs in the industry.

Except here â€” these runways are the real deal.

And if you think airplanes aren’t really important to you, think about this:
Many aircraft at Farnborough will be planes that will transport you to unforgettable vacations and career-changing business events. Some of these planes will be bought and paid for by your (US) taxes. They’ll help provide your national security and even help disaster victims.

And let’s face it: Some of these planes can do things that are just downright unbelievable and a lot of them look really cool doing it.

It’s hard to narrow it down, but here are five planes we found at Farnborough that you actually might find yourself traveling on soon.
Take a quick look at what you can expect, and what sets them apart.

Tired of cramped single-aisle airliners? Bombardier’s new CS100 feels roomy, like a double-aisle widebody airliner, even though it only has one aisle.
Avgeeks at Farnborough got a good look at this plane as pilots put it through its paces in the sky over southern England.
You may be flying on this plane soon because Delta Air Lines, the world’s second largest carrier, agreed to buy at least 75 of them earlier this year. The airline has left the door open to the possibility it may buy more.
With a seating capacity of 110-125, it’s the first narrow body airliner designed from scratch in nearly 30 years. Range: about 3,500 miles.
Bombardier designed the plane to be very efficient, with lightweight, super-strong carbon fiber wings and fuel-sipping jet engines.
Key consumer features include high cabin ceilings, larger lavatories, bigger windows and quieter engines.
The CS100 will be followed by larger versions.

Farnborough has seen this twin-engine marvel before — but it remained a big hit again this year — thrilling crowds Tuesday with stunning tight turns and low passes over the airfield.

One thing that sets the A350 apart is that more than 50% of it is made of strong, lightweight carbon fiber instead of traditional aluminum.
Building airliners with carbon fiber is expensive, but it gives back a lot in return — like low-pressure cabins that help prevent passenger jet lag. Lightweight carbon fiber saves fuel, which can cut operating costs for airlines. Whether those savings are passed on to consumers… well that’s up to them.

Investing in 1 of the youngest, cleanest, greenest fleets in the sky https://t.co/nyarT5FiKM @virginatlantic #FIA16 pic.twitter.com/dfPp7obHy2

Delta Air Lines is set to begin flying the A350 in 2017.
The planes seat 315 passengers in a two-class layout. They have a top speed of about 85% of the speed of sound. Their amazing range has allowed airlines like Qatar Airways to use them on ultra long-haul routes like Doha, Qatar, to Boston. Flight time: 12 hours.
What’s the next trick for the amazing A350?
The next version is called the A350-1000. Sir Richard Branson stopped by the airshow on Monday to let us know that the airline he founded is going to add a dozen A350-1000s to its fleet starting in 2019.

Although it first entered service in 2014, Boeing’s 787-9 still gets star treatment at world-class airshows like Farnborough. And this year has been no exception.
Beginning in November 2016, the world’s biggest carrier, American Airlines, is expected to start flying the -9.
Like the A350, the Dreamliner’s carbon fiber design is creating new, ultra long-haul routes.
In 2016, a -9 started flying the longest non-stop route by a U.S. airline: Singapore to San Francisco — 16 hours, 20 minutes.
The -9 version is 6 meters (20 feet) longer than the 787-8 and can carry nearly 50 more passengers.
The next version of the 787 Dreamliner, the 787-10, is expected to make its first flight in 2018.

Embraer showed off a mockup of its new regional jet at Farnborough — the E190-E2 â€” which made its first flight last May. The plane carries 75-130 passengers and boasts efficient engines and a clever wing design for its ability to slash fuel usage by 14.5%, over previous Embraer jetliners.
The E190-E2 is expected to start flying paying passengers in 2018.

Happy birthday Boeing! The same week as the airshow, Boeing celebrates its 100th anniversary. The company that brought you the 737 back in 1967, brought a sweet present to the party this year: the 737MAX — the latest version of Boeing’s most popular selling jet.

The MAX looks nothing like its stodgy, uncool 1960s relative.
This guy sits low to the ground, like a stylish, low rider cruising through East LA.
Capacity: You and 162-200 of your friends can enjoy a flight in this plane.

It’s got new, super efficient, super quiet LEAP -1B engines, designed especially for this plane.
Avgeek alert: Plane spotters check the crazy winglets.
Boeing calls them “AT” — for advance technology — and no other airplane has them. So, if you see these things on the tips of the wings, you’ll know without a doubt it’s a 737MAX.

First taking flight in January 2016, the 737MAX is set to start commercial service with Southwest Airlines in late 2017.
These five planes — and others at Farnborough this year — won’t merely transport us, they’ll help us cross thresholds of our lives.
Through leaps in technology, they become more sophisticated with each generation.
What will the next generation of airliners bring? I can’t wait to find out!