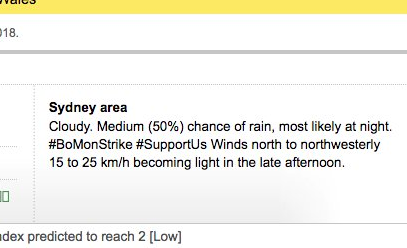 The union representing Bureau of Meteorology workers has accused the weather office of gagging employees after they drew attention to a pay freeze in social media posts.

Some staff were including #5yearpayfreeze, #SupportUs and #BoMonStrike in weather updates, in an effort to raise awareness about industrial action over their long-running pay claim.

The posts on the bureau’s official website and social media channels have since been removed.

The Community and Public Sector Union (CPSU) said in a statement BoM management had imposed “‘additional quality control’, requiring an additional level of checks before forecasts are transmitted”.

The CPSU said live radio crosses had also been stopped in some areas after weather forecasters notified management they would be reading an authorised statement to let the public know about the current situation.

The BoM says it has a responsibility to ensure forecasts “are not compromised”, but the CPSU’s Beth Vincent-Pietsch told the ABC the workers were engaging in lawful industrial action.

“They don’t want our members adding hashtags about BoM on strike to any of the web updates or the tweets that are going out even though it has been approved by Fair Work as protected industrial action,” she said.

The BoM said in a statement it had put to its staff a new Enterprise Agreement for consideration, ahead of a formal vote commencing on June 22. The previous workplace agreement covering BoM staff expired in June 2014.

But Ms Vincent-Pietsch said the workers had, “overwhelmingly rejected management’s substandard offers” and were, “left with no choice but to seek public support to resolve this protracted industrial dispute”.

“We don’t have any extraordinary claims on the table,” she said.

The bureau said it respected the rights of union members to take protected industrial action.